The First Discovery of Australia and New Guinea Being The Narrative of Portuguese and Spanish Discoveries in the Australasian Regions, between the Years 1492-1606, with Descriptions of their Old Charts. 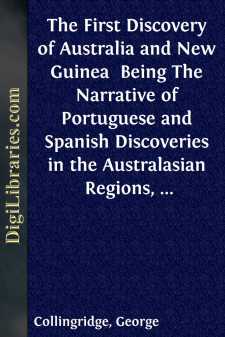 The discovery of a continental island like Australia was not a deed that could be performed in a day. Many years passed away, and many voyages to these shores of ours were undertaken by the leading maritime nations of Europe, before the problematic and mysterious TERRA AUSTRALIS INCOGNITA of the ancients became known, even in a summary way, and its insularity and separation from other lands positively established.

We must not be astonished, therefore, at the strange discrepancies that occur in early charts and narratives, for it took time to realize how different portions of our coast lines, which had been sighted from time to time might be connected, and how the gaps might be filled in by fresh discoveries and approximate surveys.

The question as to who first sighted Australia, and placed on record such discovery, either in the shape of map or narrative, will, in all probability, ever remain a mystery.

However, that such a record was made appears evident when we consider certain early charts, follow carefully the testimony which the evolution of Australian cartography affords, and take cognisance of various descriptive passages to be found in old authors.

These passages will be given here in connection with the old charts, and followed up by the narratives of voyages in search of the "Great South Land."

The numerous maps and illustrations have been carefully selected; they will greatly help the student towards understanding these first pages of the history of Australia.

THE FIRST DISCOVERY OF AUSTRALIA AND NEW GUINEA. CHAPTER I. IN QUEST OF THE SPICE ISLANDS. "And the New South rose with her forehead bare--Her forehead hare to meet the smiling sun--Australia in her golden panoply;And far off Empires see her work begun,And her large hope has compassed every sea."--SIR GILBERT PARKER.

What was the relative position of European nations in the arena of maritime discovery at the beginning of the sixteenth century?

Portugal was then mistress of the sea.

Spain, too, indulging in an awakening yawn, was clutching with her outstretched hands at the shadowy treasure-islands of an unfinished dream.

Portugal had already buried a king--the great grandson of Edward III. of England--whose enterprise had won for him the name of Henry the Navigator.

Slowly and sadly--slowly always, sadly often--his vessels had crept down the west coast of Africa; little by little one captain had overstepped the distance traversed by his predecessor, until at last in 1497 a successful voyager actually rounded the Cape.

Then Portugal, clear of the long wall that had fenced her in on one side for so many thousands of miles, trod the vast expanse of waters to the east, and soon began to plant her flag in various ports of the Indian Ocean. [See Portuguese flags on ]

Pushing on further east in search of the Spice Islands, she found Sumatra, Borneo, the Celebes, Java, Timor, Ceram, the Aru Islands and Gilolo; she had reached the famous and much coveted Moluccas, or Spice Islands, and set to work building forts and establishing trading stations in the same way as England is doing nowadays in South Africa and elsewhere.*

[* In a chart of the East Indian Archipelago, drawn probably during the first Portuguese voyages to the Spice Islands (1511-1513), the island of Gilolo is called Papoia....
Show more
Show less