The English Spy An Original Work Characteristic, Satirical, And Humorous. Comprising Scenes And Sketches In Every Rank Of Society, Being Portraits Drawn From The Life 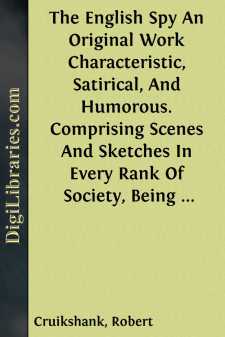 BERNARD BLACKMANTLE{*} TO THE REVIEWERS. "But now, what Quixote of the age would careTo wage a war with dirt, and fight with air?"

After twelve months of agreeable toil, made easy by unprecedented success, the period has at length arrived when your high mightinesses will be able to indulge your voracious appetites by feeding and fattening on the work of death. Already does my prophetic spirit picture to itself the black cloud of cormorants, swelling and puffing in the fulness of their editorial pride, at the huge eccentric volume which has thus thrust itself into extensive circulation without the usual cringings and cravings to the pick fault tribe. But

Let me have good proof of your greediness to devour my labours, and I will dish up such a meal for you in my next volume, as shall go nigh to produce extermination by surfeit. One favour, alone, I crave—give me abuse enough; let no squeamish pretences of respect for my bookseller, or disguised qualms of apprehension for your own sacred persons, deter the natural inclination of your hearts. The slightest deviation from your usual course to independent writers—or one step towards commendation from your gang, might induce the public to believe I had abandoned my character, and become one of your honourable fraternity-the very suspicion of which would (to me) produce irretrievable ruin. Your masters, the trading brotherhood, will (as usual) direct you in the course you should pursue; whether to approve or condemn, as their 'peculiar interests may dictate. Most sapient sirs of the secret bandit' of the screen, inquisitors of literature, raise all your arms and heels, your daggers, masks, and hatchets, to revenge the daring of an open foe, who thus boldly defies your base and selfish views; for, basking at his ease in the sunshine of public patronage, he feels that his heart is rendered invulnerable to yourpoisoned shafts. Read, and you shall find I have not been parsimonious of the means to grant you food and pleasure: errors there are, no doubt, and plenty of them, grammatical and typographical, all of which I might have corrected by an errata at the end of my volume; but I disdain the wish to rob you of your office, and have therefore left them just where I made them, without a single note to mark them out; for if all the thistles were rooted up, what would become of the asses? or of those

"Who pin their easy faith on critic's sleeve,And, knowing nothing, ev'ry thing believe?"

Fully satisfied that swarms of literary blow flies will pounce upon the errors with delight, and, buzzing with the ecstasy of infernal joy, endeavour to hum their readers into a belief of the profundity of their critic erudition;—I shall nevertheless, with Churchill, laughingly exclaim—"Perish my muse"

"If e'er her labours weaken to refineThe generous roughness of a nervous line."