The English Husbandman The First Part: Contayning the Knowledge of the true Nature of euery Soyle within this Kingdome: how to Plow it; and the manner of the Plough, and other Instruments 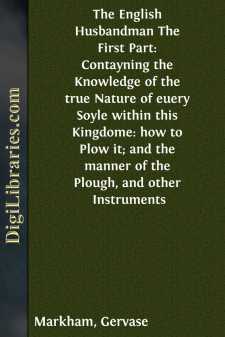 The Epistle to the generall andgentle Reader.

Although (generall reader) the nature of this worst part of this last age hath conuerted all things to such vildnesse that whatsoeuer is truely good is now esteemed most vitious, learning being derided, fortitude drawne into so many definitions that it consisteth in meere words onely, and although nothing is happy or prosperous, but meere fashion & ostentation, a tedious fustian-tale at a great mans table, stuft with bigge words, with out sence, or a mimicke Iester, that can play three parts in one; the Foole, the Pandar and the Parasit, yet notwithstanding in this apostate age I haue aduentured to thrust into the world this booke, which nothing at all belongeth to the silken scorner, but to the plaine russet honest Husbandman, for whose particular benefit, and the kingdomes generall profit, I haue with much paine, care, and industry, passed through the same. Now for the motiues which first drew me to vndertake the worke, they were diuers: as first, when I saw one man translate and paraphrase most excellently vpon Virgils Georgickes, a worke onely belonging to the Italian climbe, & nothing agreeable with ours another translates Libault & Steuens, a worke of infinit excellency, yet onely proper and naturall to the French, and not to vs: and   another takes collections from Zenophon, and others; all forrainers and vtterly vnacquainted with our climbes: when this I beheld, and saw with what good liking they were entertained of all men; and that euery man was dumbe to speake any thing of the Husbandry of our owne kingdome, I could not but imagine it a worke most acceptable to men, and most profitable to the kingdome, to set downe the true manner and nature of our right English Husbandry, our soyle being as delicate, apt, and fit for increase as any forraine soyle whatsoeuer, and as farre out-going other kingdomes in some commoditie, as they vs in other some. Hence, and from these considerations, I began this worke, of which I haue here sent thee but a small tast, which if I finde accepted, according to mine intent, I will not cease (God permitting mee life) to passe through all manner of English Husbandry and Huswifery whatsoeuer, without omission of the least scruple that can any way belong to either of their knowledges. Now gentle reader whereas you may be driuen to some amazement, at two titles which insue in the booke, namely, a former part before the first, and the first part, you shall vnderstand that those first sheetes were detained both from the Stationer and me, till the booke was almost all printed; and my selfe by extreame sicknesse kept from ouer-viewing the same, wherefore I must intreate your fauour in this impression and the rather in as much as there wanteth neither any of the words or matter whatsoeuer: Farewell.

AFORMER PART,before the first Part: Being an absoluteperfect Introduction into all theRules of true Husbandry; and must first of all beread, or the Readers labour will be frustrate. Chap. I.The Proem of the Author. What a Husbandman is: His Vtilitie and Necessitie.

It is a common Adage in our English spéech, that a man generally séene in all things can bée particularly perfect or compleate in none: Which Prouerbe there is no question will both by the curious and enuious be heauily imposed vpon my backe, because in this, and other workes, I haue delt with many things of much importance, and such as any one of them would require a whole liues experience, whereas neither my Birth, my Education, nor the generall course of my life can promise no singularitie in any part of those Artes they treate of: but for suggestions (the liberty whereof the wisedome of Kings could neuer bridle) let them poison themselues with their   owne gall, they shall not so much as make me looke ouer my shoulder from my labour: onely to the curteous and well meaning I giue this satisfaction, I am but onely a publique Notary, who record the most true and infallible experience of the best knowing Husbands in this land.

Besides, I am not altogether vnséene in these misteries I write of: for it is well knowne I followed the profession of a Husbandman so long my selfe, as well might make mee worthy to be a graduate in the vocation: wherein my simplicitie was not such but I both obserued well those which were estéemed famous in the profession, and preserued to my selfe those rules which I found infallible by experience....