The Digger Movement in the Days of the Commonwealth As Revealed in the Writings of Gerrard Winstanley, the Digger, Mystic and Rationalist, Communist and Social Reformer 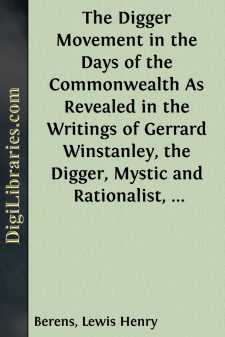 “Whatever the prejudices of some may suggest, it will be admitted by all unbiassed judges, that the Protestant Reformation was neither more nor less than an open rebellion. Indeed, the mere mention of private judgment, on which it was avowedly based, is enough to substantiate this fact. To establish the right of private judgment, was to appeal from the Church to individuals; it was to increase the play of each man’s intellect; it was to test the opinion of the priesthood by the opinions of laymen; it was, in fact, a rising of the scholars against their teachers, of the ruled against their rulers.”—Buckle.

What is known in history as the Reformation is one of those monuments in the history of the development of the human mind betokening its entry into new territory. Fundamental conceptions and beliefs, cosmological, physical, ethical or political, once firmly established, change but slowly; the universal tendency is tenaciously to cling to them despite all evidence to the contrary. Still men’s views do change with their intellectual development, as newly discovered facts and newly accepted ideas come into conflict with old opinions, and force them to reconsider the evidence on which these latter were based. Prior to the Reformation, many such conceptions and beliefs, at one time holding undisputed dominion over the human mind, had been called into question, their authority challenged, undermined, and weakened, and they had commenced to yield pride of place to others more in accordance with increased knowledge of nature and of life. The revival of classical learning, geographical and astronomical discoveries, and more especially, perhaps, the invention and rapid spread of the art of printing, had all conspired to give an unparalleled impetus to intellectual development,—and the Reformation was, in truth, the outward manifestation in the religious world of this development.

Prior to the Reformation, wherever a man might turn his steps in Western Europe, he found himself confronted with what was proudly termed the Universal Church: one hierarchy, one faith, one form of worship, in which the officiating priests were assumed to be the indispensable mediators between God and man, everywhere confronted him. Religion was then much more intimately blended with the life of man than it is now; and on all matters of religion, Western Europe seemed to present a united front and to be impervious to change. Appearances, however, are proverbially deceitful. Beneath this apparent uniformity and general conformity, there lurked countless forces, spiritual, intellectual, social and political, making for change. Dissent and dissatisfaction, with myriads of tiny teeth, had undermined and weakened the stately columns that upheld the imposing structure of the Universal Church. Even within the Church itself there was seething inquietude, and thousands of its purest souls longed, prayed and struggled for its practical amendment. To emancipate the Church from the clutches of the autocracy of Rome; to remove the abuses that, in the course of centuries, had grown round and sullied its primitive purity; to lighten the fiscal oppression of the Papacy and to check the rapacity of the Cardinals; to reform and discipline the priesthood; even to modify certain doctrines and dogmas: such were the aspirations of some of the most devout, eminent and cultured sons of the Church....