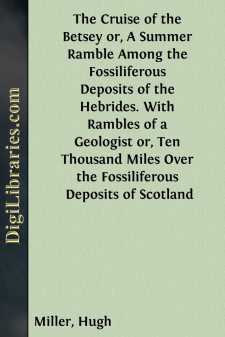 The pleasant month of July had again come round, and for full five weeks I was free. Chisels and hammers, and the bag for specimens, were taken from their corner in the dark closet, and packed up with half a stone weight of a fine soft Conservative Edinburgh newspaper, valuable for a quality of preserving old things entire. At noon on St. Swithin's day (Monday the 15th), I was speeding down the Clyde in the Toward Castle steamer, for Tobermory in Mull. In the previous season I had intended passing direct from the Oölitic deposits of the eastern coast of Scotland, to the Oölitic deposits of the Hebrides. But the weeks glided all too quickly away among the ichthyolites of Caithness and Cromarty, and the shells and lignites of Sutherland and Ross. My friend, too, the Rev. Mr. Swanson, of Small Isles, on whose assistance I had reckoned, was in the middle of his troubles at the time, with no longer a home in his parish, and not yet provided with one elsewhere; and I concluded he would have but little heart, at such a season, for breaking into rocks, or for passing from the too pressing monstrosities of an existing state of things, to the old lapidified monstrosities of the past. And so my design on the Hebrides had to be postponed for a twelvemonth. But my friend, now afloat in his Free Church yacht, had got a home on the sea beside his island charge, which, if not very secure when nights were dark and winds loud, and the little vessel tilted high to the long roll of the Atlantic, lay at least beyond the reach of man's intolerance, and not beyond the protecting care of the Almighty. He had written me that he would run down his vessel from Small Isles to meet me at Tobermory, and in consequence of the arrangement I was now on my way to Mull.

St. Swithin's day, so important in the calendar of our humbler meteorologists, had in this part of the country its alternate fits of sunshine and shower. We passed gaily along the green banks of the Clyde, with their rich flat fields glittering in moisture, and their lines of stately trees, that, as the light flashed out, threw their shadows over the grass. The river expanded into the estuary, the estuary into the open sea; we left behind us beacon, and obelisk, and rock-perched castle;—

"Merrily down we dropBelow the church, below the tower,Below the light house top,"

and, as the evening fell, we were ploughing the outer reaches of the Frith, with the ridgy table-land of Ayrshire stretching away, green, on the one side, and the serrated peaks of Arran rising dark and high on the other....