The Crest-Wave of Evolution A Course of Lectures in History, Given to the Graduates' Class in the Raja-Yoga College, Point Loma, in the College-Year 1918-19 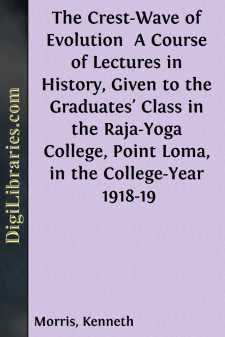 These lectures will not be concerned with history as a record of wars and political changes; they will have little to tell of battles, murders, and sudden deaths. Instead, we shall try to discover and throw light on the cyclic movements of the Human Spirit. Back of all phenomena, or the outward show of things, there is always a noumenon in the unseen. Behind the phenomena of human history, the noumenon is the Human Spirit, moving in accordance with its own necessities and cyclic laws. We may, if we go to it intelligently, gain some inkling of knowledge as to what those laws are; and I think that would be, in its way, a real wisdom, and worth getting. But for the most part historical study seeks knowledge only; and how it attains its aim, is shown by the falseness of what passes for history. In most textbooks you shall find, probably, a round dozen of lies on as many pages. And these in themselves are fruitful seeds of evil; they by no means end with the telling, but go on producing harvests of wrong life; which indeed is only the Lie incarnate on the plane of action. The Eternal Right Thing is what is called in Sanskrit SAT, the True; it opposite is the Lie, in one fashion or another, always; and what we have to do, our mission and raison d'etre as students of Theosophy, is to put down the Lie at every turn, and chase it, as far as we may, out of the field of life.

For example, there is the Superior-Race Lie: I do not know where it shall not be found. Races A, B, C, and D go on preaching it for centuries; each with an eye to its sublime self. In all countries, perhaps, history is taught with that lie for mental background. Then we wonder that there are wars. But Theosophy is called onto provide a true mental background for historical study; and it alone can do so. It is the mission of Point Loma, among many other things, to float a true philosophy of history on to the currents of world-thought: and for this end it is our business to be thinkers, using the divine Manasic light within us to some purpose. H.P. Blavatsky supplied something much greater than a dogma: she—like Plato —gave the world a method and a spur to thought: pointed for it a direction, which following, it might solve all problems and heal the wounds of the ages.

A false and foolish notion in the western world has been, tacitly to accept the Greeks and Hebrews of old for the two fountains of all culture since; the one in secular matter, the other in religion and morality. Of the Hebrews nothing need be said here; but that true religion and morality have their source in the ever-living Human Spirit, not in any sect, creed, race, age, or bible. I doubt there has been any new discovery in ethics since man was man; or rather, all discoveries have been made by individuals for themselves; and each, having discovered anything, has found that that same principle was discovered a thousand times before, and written a thousand times. There is no platitude so platitudinous, but it remains to burst upon the perceptions of all who have not yet perceived it, as a new and burning truth; and on the other hand, there is no startling command to purity or compassion, that has not been given out by Teachers since the world began.—As for Greece, there was a brilliant flaming up of the Spirit there in the Fourth and Fifth Centuries B.C.; and its intensity, like the lights of an approaching automobile, rather obscures what lies beyond....