The Cook and Housekeeper's Complete and Universal Dictionary; Including a System of Modern Cookery, in all Its Various Branches, Adapted to the Use of Private Families 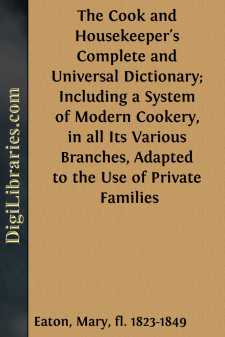 INTRODUCTION. Nothing is more obvious, than that experience purchased by the sacrifice of independence is bought at too dear a rate. Yet this is the only consolation which remains to many females, while sitting on the ashes of a ruined fortune, and piercing themselves with the recollection of the numerous imprudencies into which they have been led, simply for the want of better information. Not because there is any want of valuable publications, for in the present age they abound; but rather because they contain such a variety of superfluous articles, and are too indiscriminate to become generally useful. A young female, just returned from the hymeneal altar, is ready to exclaim on the first perusal, as the philosopher did who visited the metropolis, 'How many things are here which I do not want!' The volume when purchased is often found to contain what is only or chiefly adapted to those who live in "king's houses," or "who fare sumptuously every day."

Indeed, it has been the failing of most works of this nature, that they have either been too contracted, or too diffuse; detailed what was unnecessary, or treated superficially what was in fact of most consequence to the great bulk of mankind. If it be objected to the present work, that it exhibits nothing new; that the experiments are founded upon the simplest rules of nature; that most of the things have been rehearsed in various forms; it is not necessary to deny or to conceal the fact, every other consideration having been subordinated to one leading object, and that is general utility. It is but justice however to add, that many of the articles are perfectly original, having been extracted from a variety of unpublished manuscripts, obligingly and expressly furnished in aid of the present undertaking. A great number of outlandish articles are intentionally omitted, as well as a farrago of French trifles and French nonsense, in order to render the work truly worthy of the patronage of the genuine English housekeeper.

It may also fairly be presumed, that the superior advantages of the present work will immediately be recognized, not only as comprehending at once the whole theory of Domestic Management, but in a form never before attempted, and which of all others is best adapted to facilitate the acquisition of useful knowledge. The alphabetical arrangement presented in the following sheets, pointing out at once the article necessary to be consulted, prevents the drudgery of going through several pages in order to find it, and supplies by its convenience and universal adaptation, the desideratum so long needed in this species of composition.

Importance of Domestic Habits and Acquirements.

Though domestic occupations do not stand so high in the general esteem as they formerly did, there are none of greater importance in social life, and none when neglected that produce a larger portion of human misery. There was a time when ladies knew nothing beyond their own family concerns; but in the present day there are many who know nothing about them....