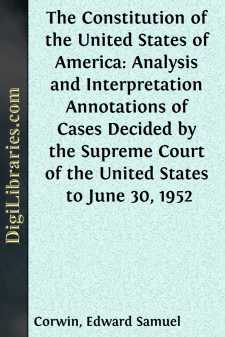 It is my purpose in this Introduction to the Constitution of the United States, Annotated to sketch rapidly certain outstanding phases of the Supreme Court's interpretation of the Constitution for the illustration they may afford of the interests, ideas, and contingencies which have from time to time influenced the Court in this still supremely important area of its powers and of the comparable factors which give direction to its work in the same field at the present time.

As employed in this country, Constitutional Law signifies a body of rules resulting from the interpretation by a high court of a written constitutional instrument in the course of disposing of cases in which the validity, in relation to the constitutional instrument, of some act of governmental power, State or national, has been challenged. This function, conveniently labelled "Judicial Review," involves the power and duty on the part of the Court of pronouncing void any such act which does not square with its own reading of the constitutional instrument. Theoretically, therefore, it is a purely juristic product, and as such does not alter the meaning. To those who hold this theory, the Court does not elaborate the instrument, as legislative power might; it elucidates it, bringing forth into the light of day, as it were, what was in the instrument from the first.

In the case of judicial review as exercised by the Supreme Court of the United States in relation to the national Constitution, its preservative character has been at times a theme of enthusiastic encomium, as in the following passage from a speech by the late Chief Justice White, made shortly before he ascended the Bench:

... The glory and ornament of our system which distinguishes it from every other government on the face of the earth is that there is a great and mighty power hovering over the Constitution of the land to which has been delegated the awful responsibility of restraining all the coordinate departments of government within the walls of the governmental fabric which our fathers built for our protection and immunity.

At other times the subject has been dealt with less enthusiastically, even skeptically.

One obstacle that the theory encountered very early was the refusal of certain Presidents to regard the Constitution as primarily a source of rules for judicial decision. It was rather, they urged, a broadly discretionary mandate to themselves and to Congress. And pursuing the logic of this position, they contended that while the Court was undoubtedly entitled to read the Constitution independently for the purpose of deciding cases, this very purpose automatically limited the authoritativeness of its readings; and that within their respective jurisdictions President and Congress enjoyed the same correlative independence as the Court did within its jurisdiction. This was, in effect, the position earlier of Jefferson and Jackson, later of Lincoln, and in recent times that of the two Roosevelts.

Another obstacle has been of the Court's own making....