The Compleat Cook Expertly Prescribing the Most Ready Wayes, Whether Italian, Spanish or French, for Dressing of Flesh and Fish, Ordering Of Sauces or Making of Pastry 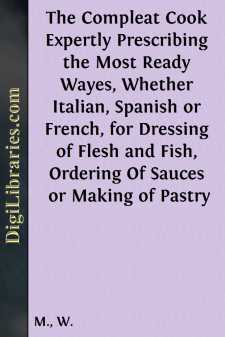 Expertly prescribing the most ready wayes, whether Italian, Spanish, or French, for dressing of Flesh and Fish, &c.

To make a Posset, the Earle of Arundels Way..

Take a quart of Creame, and a quarter of a Nutmeg in it, then put it on the fire, and let it boyl a little while, and as it is boyling take a Pot or Bason, that you meane to make your Posset in, and put in three spoonfuls of Sack, and some eight of Ale, and sweeten it with Sugar, then set it over the coles to warm a little while, then take it off and let it stand till it be almost cool, then put it into the Pot or Bason and stir it a little, and let it stand to simper over the fire an hour or more, for the longer the better.

To boyle a Capon larded with Lemons.

Take a fair Capon and truss him, boyl him by himselfe in faire water with a little small Oat-meal, then take Mutton Broath, and half a pint of White-wine, a bundle of Herbs, whole Mace, season it with Verjuyce, put Marrow, Dates, season it with Sugar, then take preserved Lemons and cut them like Lard, and with a larding pin, lard in it, then put the capon in a deep dish, thicken your broth with Almonds, and poure it on the Capon.

Parboyl it, and then sauce it in Vinegar then Lard it very thick, and season it with Pepper, Ginger and Nutmegs, put it into a deep Pye with good store of sweet butter, and let it bake, when it is baked, take a pint of Hippocras, halfe a pound of sweet butter, two or three Nutmeg, little Vinegar, poure it into the Pye in the Oven and let it lye and soake an hour, then take it out, and when it is cold stop the vent hole.

To make fine Pan-cakes fryed without Butter or Lard.

Take a pint of Cream, and six new laid Egs, beat them very well together, put in a quarter of a pound of Sugar, and one Nutmeg or a little beaten Mace (which you please) and so much flower as will thicken almost as much as ordinarily Pan-cake batter; your Pan must be heated reasonably hot & wiped with a clean Cloth, this done put in your Batter as thick or thin as you please.

To dresse a Pig the French manner.

Take it and spit it, & lay it down to the fire, and when your Pig is through warme, skin her, and cut her off the Spit as another Pig is, and so divide it in twenty peeces more or lesse as you please; when you have so done, take some White-wine and strong broth, and stew it therein, with an Onion or two mixed very small, a little Time also minced with Nutmeg sliced and grated Pepper, some Anchoves and Elder Vinegar, and a very little sweet Butter, and Gravy if you have it, so Dish it up with the same Liquor it is stewed in, with French Bread sliced under it, with Oranges and Lemons.

To make a Steake pye, with a French Pudding in the Pye.

Season your Steaks with Pepper & Nutmegs, and let it stand an hour in a Tray then take a piece of the leanest of a Legg of Mutton and mince it small with Suet and a few sweet herbs, tops of young Time, a branch of Penny-royal, two or three of red Sage, grated bread, yolks of Eggs, sweet Cream, Raisins of the Sun; work altogether like a Pudding, with your hand stiff, and roul them round like Bals, and put them into the Steaks in a deep Coffin, with a piece of sweet Butter; sprinkle a little Verjuyce on it, bake it, then cut it up and roul Sage leaves and fry them, and stick them upright in the wals, and serve your Pye without a Cover, with the juyce of an Orange or Lemon....