The Causes of the Rebellion in Ireland Disclosed In an Address to the People of England, in Which It Is Proved by Incontrovertible Facts, That the System for Some Years Pursued in That Country, Has Driven It into Its Present Dreadful Situation 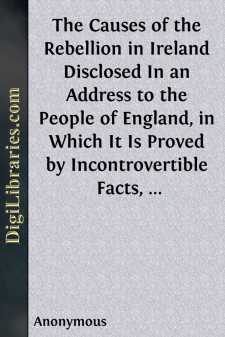 It is always a bold undertaking in a private individual to become the advocate of a suffering people. It is peculiarly difficult at the present moment to be the advocate of the people of Ireland, because there are among them men who have taken the power of redress into their own hands, and committed acts of outrage and rebellion which no sufferings could justify, and which can only tend to aggravate ten-fold the other calamities of their country. Deeply impressed, however, as I am with a conviction that these difficulties stand in my way, I shall yet venture to state to Englishmen the case of Ireland. In doing so, I rest not on a vain confidence in my own strength, but on the nature of the cause I plead; for I am convinced, that when the train of measures which have led that miserable country into its present situation shall be fully disclosed, it will be but little difficult to rouze the people of England not merely to commiserate a distressed country, but excite them to exert their constitutional endeavours, as head of the British empire, to avert the destruction of its principal member.

There is another circumstance which gives me hope. The people of England at this hour feel themselves much more interested in what concerns Irishmen, than they have ever done at any former period. Whatever mischiefs may have resulted to human society from that kind of philosophic illumination by which modern times are distinguished, one certain good at least has been produced by it—men have become better acquainted—the bond of a common nature has been strengthened—and each country begins to feel an interest in the concerns of every other. It is not to a more extensive personal intercourse, or to the creation of any new principles of political union, that this is to be attributed. It is owing solely to an increased communication of sentiment and feeling—to a knowledge which has diffused itself through the world that the human mind is every where made of the same materials, and that on all the great questions which concern man's interest in society, the men of every country think alike. Hence has arisen an increased sympathy between nations—if not between those who govern them, at least between those by whom they are constituted; and hence too has it followed, that those national antipathies which had so long debased and afflicted mankind, are now become less strong and rancorous; and, it may be reasonable to hope, will one day be known no more.

It is not, however, on the influence of this nascent principle of philanthropy among nations that I ground my principal hope, when I call on Englishmen to hear with an ear of kindness and concern the complaint of a sister-country. I resort to a still more powerful principle—I shall call on them as a people famed even in barbarous times for those feelings of generosity and compassion, which are inseparable from valour—I shall call on them as a FREE people, to watch with caution the progress of despotism toward their own shores, stalking in all its horrors of murder, pillage, and flames, through the territory of a neighbour—I shall call even on their INTEREST, to save from utter ruin, political, commercial, and constitutional, the most valuable member of the British empire!...