The Call of the Town A Tale of Literary Life 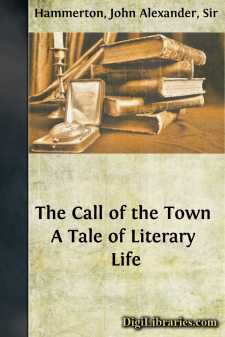 CHAPTER I "THE PROUD PARENT"

If you happen to be riding a bicycle you arrive somewhat unexpectedly in the little Ardenshire village of Hampton Bagot, and are through it in a flash, before you quite realise its existence. But in the unlikely event of your having business or pleasure there, you approach the place more leisurely in the carrier's cart from the little station which absurdly bears the name of the village, though two miles distant.

The ancient Parish Church, with its curious old chained library and bits of Saxon masonry, "perfectly unique," as Mr. Godfrey Needham, the vicar, used to say, and the one wide street of quaint old houses, with their half-timbered fronts, remain to this day much as they were, no doubt, when good Queen Bess ruled England. But the thirsty cyclist, whose throat may happen to be parched at this particular stage of his journey, is a poor substitute for the old-time stage-coach which made Hampton Bagot a place of change. Somehow, the village continues to exist, though its few hundred people scrape their livings in ways that are not obvious to the casual visitor. The surrounding district is richly pastoral, plentifully sprinkled with cosy farm-houses, and here, perhaps, we have the reason why Hampton continues under the sun.

If you wandered along the few hundred yards of street, and noted the various substitutes for shops, in which oranges and sweets and babies' clothing mingle familiarly with hams and shoe-laces, you would be struck by the more pretentious exterior of one which bears in crudely-painted letters the legend, EDWARD JOHN CHARLES, and underneath, in smaller characters, the words Post Office. The building, a two-storied one, with the familiar blackened timbers supporting high-pitched gables, and a bay-window of lozenged glass, was, at the time of which I write, the place of next importance in the village to the "Wings and Spur." Behind this window, and by peering closely, one could see dusty packets of writing-paper and fly-blown envelopes, a few cheap books, clay and briar pipes, tobacco, and some withered-looking cigars. Below the window, after diligent search, a slit for the admission of letters might be found.

But while the place itself would easily have been passed over, not so the figure at the door; for there, most days of the week and most hours of the day, stood the portly form of Edward John Charles himself.

It was as though the legend overhead referred to the man beneath, and the smile usually on his face spoke of contentment with himself and the world at large. His face was ruddy and clean-shaven, as he chose to coax his whisker underneath his chin, where it sprouted so amply that the need to wear a collar or a tie did not exist; certainly, was not recognised.

Somewhat under medium height, and of more than medium girth, Edward John Charles was by no means an unpleasant figure to the eye, and if the commonplace caste of face and prominent ears did not suggest any marked intellectual gifts, the net result of a casual survey was "a good-natured sort." He had a habit of concealing his hands mysteriously underneath his coat-tails as he stood at the door beneath the staring sign, and his coat had absorbed something of its owner's nature, for by the perch of the tails one could guess his mood....