The Biography of a Grizzly 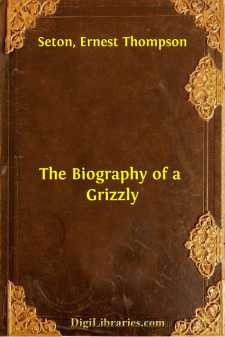 e was born over a score of years ago, away up in the wildest part of the wild West, on the head of the Little Piney, above where the Palette Ranch is now.

His Mother was just an ordinary Silvertip, living the quiet life that all Bears prefer, minding her own business and doing her duty by her family, asking no favors of any one excepting to let her alone.

It was July before she took her remarkable family down the Little Piney to the Graybull, and showed them what strawberries were, and where to find them.

Notwithstanding their Mother's deep conviction, the cubs were not remarkably big or bright; yet they were a remarkable family, for there were four of them, and it is not often a Grizzly Mother can boast of more than two.

The woolly-coated little creatures were having a fine time, and reveled in the lovely mountain summer and the abundance of good things. Their Mother turned over each log and flat stone they came to, and the moment it was lifted they all rushed under it like a lot of little pigs to lick up the ants and grubs there hidden.

"THEY ALL RUSHED UNDER IT LIKE A LOT OF LITTLE PIGS."

It never once occurred to them that Mammy's strength might fail sometime, and let the great rock drop just as they got under it; nor would any one have thought so that might have chanced to see that huge arm and that shoulder sliding about under the great yellow robe she wore. No, no; that arm could never fail. The little ones were quite right. So they hustled and tumbled one another at each fresh log in their haste to be first, and squealed little squeals, and growled little growls, as if each was a pig, a pup, and a kitten all rolled into one.

They were well acquainted with the common little brown ants that harbor under logs in the uplands, but now they came for the first time on one of the hills of the great, fat, luscious Wood-ant, and they all crowded around to lick up those that ran out. But they soon found that they were licking up more cactus-prickles and sand than ants, till their Mother said in Grizzly, "Let me show you how."

She knocked off the top of the hill, then laid her great paw flat on it for a few moments, and as the angry ants swarmed on to it she licked them up with one lick, and got a good rich mouthful to crunch without a grain of sand or a cactus-stinger in it. The cubs soon learned. Each put up both his little brown paws, so that there was a ring of paws all around the ant-hill, and there they sat, like children playing "hands," and each licked first the right and then the left paw, or one cuffed his brother's ears for licking a paw that was not his own, till the ant-hill was cleared out and they were ready for a change.

Ants are sour food and made the Bears thirsty, so the old one led down to the river. After they had drunk as much as they wanted, and dabbled their feet, they walked down the bank to a pool, where the old one's keen eye caught sight of a number of Buffalo-fish basking on the bottom....