The Belief in Immortality and the Worship of the Dead, Volume I (of 3) The Belief Among the Aborigines of Australia, the Torres Straits Islands, New Guinea and Melanesia 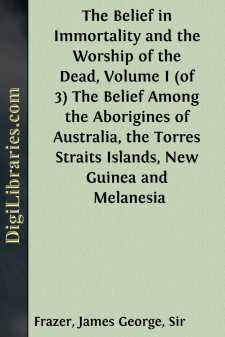 Natural theology, and the three modes of handling it, the dogmatic, the philosophical, and the historical.

The subject of these lectures is a branch of natural theology. By natural theology I understand that reasoned knowledge of a God or gods which man may be supposed, whether rightly or wrongly, capable of attaining to by the exercise of his natural faculties alone. Thus defined, the subject may be treated in at least three different ways, namely, dogmatically, philosophically, and historically. We may simply state the dogmas of natural theology which appear to us to be true: that is the dogmatic method. Or, secondly, we may examine the validity of the grounds on which these dogmas have been or may be maintained: that is the philosophic method. Or, thirdly, we may content ourselves with describing the various views which have been held on the subject and tracing their origin and evolution in history: that is the historical method. The first of these three methods assumes the truth of natural theology, the second discusses it, and the third neither assumes nor discusses but simply ignores it: the historian as such is not concerned with the truth or falsehood of the beliefs he describes, his business is merely to record them and to track them as far as possible to their sources. Now that the subject of natural theology is ripe for a purely dogmatic treatment will hardly, I think, be maintained by any one, to whatever school of thought he may belong; accordingly that method of treatment need not occupy us further. Far otherwise is it with the philosophic method which undertakes to enquire into the truth or falsehood of the belief in a God: no method could be more appropriate at a time like the present, when the opinions of educated and thoughtful men on that profound topic are so unsettled, diverse, and conflicting. A philosophical treatment of the subject might comprise a discussion of such questions as whether a natural knowledge of God is possible to man, and, if possible, by what means and through what faculties it is attainable; what are the grounds for believing in the existence of a God; and, if this belief is justified, what may be supposed to be his essential nature and attributes, and what his relations to the world in general and to man in particular. Now I desire to confess at once that an adequate discussion of these and kindred questions would far exceed both my capacity and my knowledge; for he who would do justice to so arduous an enquiry should not only be endowed with a comprehensive and penetrating genius, but should possess a wide and accurate acquaintance with the best accredited results of philosophic speculation and scientific research. To such qualifications I can lay no claim, and accordingly I must regard myself as unfitted for a purely philosophic treatment of natural theology. To speak plainly, the question of the existence of a God is too deep for me. I dare neither affirm nor deny it. I can only humbly confess my ignorance. Accordingly, if Lord Gifford had required of his lecturers either a dogmatic or a philosophical treatment of natural theology, I could not have undertaken to deliver the lectures.

The method followed in these lectures is the historical.

But in his deed of foundation, as I understand it, Lord Gifford left his lecturers free to follow the historical rather than the dogmatic or the philosophical method of treatment. He says: "The lecturers shall be under no restraint whatever in their treatment of their theme: for example, they may freely discuss (and it may be well to do so) all questions about man's conceptions of God or the Infinite, their origin, nature, and truth." In making this provision the founder appears to have allowed and indeed encouraged the lecturers not only to discuss, if they chose to do so, the philosophical basis of a belief in God, but also to set forth the various conceptions of the divine nature which have been held by men in all ages and to trace them to their origin: in short, he permitted and encouraged the lecturers to compose a history of natural theology or of some part of it. Even when it is thus limited to its historical aspect the theme is too vast to be mastered completely by any one man: the most that a single enquirer can do is to take a general but necessarily superficial survey of the whole and to devote himself especially to the investigation of some particular branch or aspect of the subject. This I have done more or less for many years, and accordingly I think that without being presumptuous I may attempt, in compliance with Lord Gifford's wishes and directions, to lay before my hearers a portion of the history of religion to which I have paid particular attention. That the historical study of religious beliefs, quite apart from the question of their truth or falsehood, is both interesting and instructive will hardly be disputed by any intelligent and thoughtful enquirer....