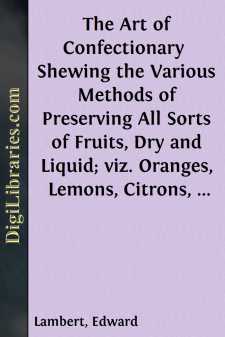 Of the Manner of clarifying Sugar, and the different Ways of boiling it.

Since the Ground-work of the Confectioner's Art depends on the Knowledge of clarifying and boiling Sugars, I shall here distinctly set them down, that the several Terms hereafter mentioned may the more easily be understood; which, when thoroughly comprehended, will prevent the unnecessary Repetitions of them, which would encumber the Work and confound the Practitioner, were they to be explained in every Article, as the Variety of the Matter should require: I shall therefore, through the whole Treatise, stick to these Denominations of the several Degrees of boiling Sugar, viz. Clarifying, Smooth, Blown, Feather'd, Cracked, and Carmel.

Break into your preserving Pan the White of one Egg, put in four Quarts of Water, beat it up to a Froth with a Whisk, then put in twelve Pounds of Sugar, mixed together, and set it over the Fire; when it boils up, put in a little cold Water, which will cause it to sink; let it rise again, then put in a little more Water; so do for four or five times, till the Scum appears thick on the Top; then remove it from the Fire and let it settle; then take off the Scum, and pass it through your straining Bag.

Note, If the Sugar doth not appear very fine, you must boil it again before you strain it; otherwise in boiling it to an Height, it will rise over the Pan, and give the Artist a great deal of Trouble.

The boiling Sugar to the Degree called Smooth.

When your Sugar is thus clarified, put what Quantity you shall have Occasion for over the Fire, to boil smooth, the which you will prove by dipping your Scummer into the Sugar; and then touching it with your Fore-finger and Thumb, in opening them a little you will see a small Thread drawn betwixt, which immediately breaks, and remains in a Drop on your Thumb; thus it is a little smooth; then boiling it more, it will draw into a larger String; then it is become very smooth.

Boil your Sugar yet longer than the former, and try it thus, viz. Dip in your Scummer, and take it out, shaking off what Sugar you can into the Pan, and then blow with your Mouth strongly through the Holes, and if certain Bubbles or Bladders blow through, it is boiled to the Degree called Blown.

Is a higher Degree of boiling Sugar, which is to be proved by dipping the Scummer when it hath boiled somewhat longer; shake it first over the Pan, then giving it a sudden Flurt behind you; if it be enough, the Sugar will fly off like Feathers.

Is proved by letting it boil somewhat longer; and then dipping a Stick into the Sugar, which immediately remove into a Pot of cold Water standing by you for that Purpose, drawing off the Sugar that cleaves to the Stick, and if it becomes hard, and will snap in the Water, it is enough; if not, you must boil it till it comes to that Degree.

Note, Your Water must be always very cold, or it will deceive you.

Is known by boiling yet longer, and is proved by dipping a Stick, as aforesaid, first in the Sugar, and then in the Water: But this you must observe, when it comes to the Carmel Height, it will snap like Glass the Moment it touches the cold Water, which is the highest and last Degree of boiling Sugar....