The American Housewife Containing the Most Valuable and Original Receipts in all the Various Branches of Cookery; and Written in a Minute and Methodical Manner 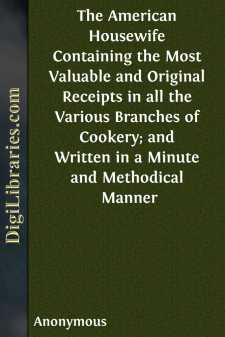 Meat to be in perfection should be kept a number of days when the weather will admit of it. Beef and mutton should be kept at least a week in cold weather, and poultry three or four days. If the weather is hot, it will keep but a short time. It should be kept in a cool, airy place, away from the flies, and if there is any danger of its spoiling, a little salt should be rubbed over it. When meat is frozen, it should be put into lukewarm water, and not taken out till the frost is extracted. If there is any frost in it when put to the fire, it will not cook well. The best way to boil it is to put it in cold water, and boil it gently, with just water enough to cover it, as it hardens by furious boiling. The part that is to be up on the table, should be down in the pot, as the scum that rises is apt to make the meat look dark—the scum should be taken off as soon as it rises. The liquor in which all kinds of fresh meat is boiled, makes a good soup, when thickened and seasoned. Boiling is the cheapest way of cooking meat, provided you make a soup of the liquor; if not, it is the dearest, as most of the gelatine is extracted by the process of boiling, which is the most nourishing part, and if not used for soup, is completely lost. In roasting meat, only the juices and fat are extracted, but not lost, as the juices make good gravy, and the fat is good for various culinary purposes. When it is put down to roast, there should be a little water in the dripping pan. For broiling, the bars of the gridiron should be perfectly clean, and greased with lard or butter, otherwise the meat will retain the impression of the bars. The bars of the gridiron should be concave, and terminate in a trough, to catch the juices, or they will drop in the fire and smoke the meat. A good fire of hot coals is necessary to have the meat broil as quick as possible without burning. The gridiron should be put on the fire, and well heated before the meat is laid on it. The dish should be very hot on which broiled meat is put, and it should not be seasoned till taken up. If you wish to fry meat, cut a small piece of pork into slices, and fry them a light brown, then take them up and put in your meat, which should be perfectly dry. When the meat is sufficiently fried, take it up, remove the frying pan from the fire to cool; when so, turn in a little cold water for the gravy, put it on the fire—when it boils, stir in a little mixed flour and water, let it boil, then turn it over the meat. If not rich enough, add butter and catsup if you like.

The tender loin and first and second cuts off the rack are the best roasting pieces—the third and fourth cuts are good. When the meat is put to the fire, a little salt should be sprinkled on it, and the bony side turned towards the fire first. When the bones get well heated through, turn the meat, and keep a brisk fire—baste it frequently while roasting. There should be a little water put into the dripping pan when the meat is put down to roast....