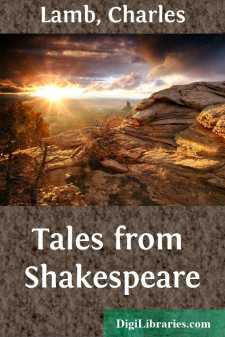 There was a certain island in the sea, the only inhabitants of which were an old man, whose name was Prospero, and his daughter Miranda, a very beautiful young lady. She came to this island so young, that she had no memory of having seen any other human face than her father's.

They lived in a cave or cell, made out of a rock; it was divided into several apartments, one of which Prospero called his study; there he kept his books, which chiefly treated of magic, a study at that time much affected by all learned men: and the knowledge of this art he found very useful to him; for being thrown by a strange chance upon this island, which had been enchanted by a witch called Sycorax, who died there a short time before his arrival, Prospero, by virtue of his art, released many good spirits that Sycorax had imprisoned in the bodies of large trees, because they had refused to execute her wicked commands. These gentle spirits were ever after obedient to the will of Prospero. Of these Ariel was the chief.

WHEN CALIBAN WAS LAZY AND NEGLECTED HIS WORK,ARIEL WOULD COME SLILY AND PINCH HIM

The lively little sprite Ariel had nothing mischievous in his nature, except that he took rather too much pleasure in tormenting an ugly monster called Caliban, for he owed him a grudge because he was the son of his old enemy Sycorax. This Caliban, Prospero found in the woods, a strange misshapen thing, far less human in form than an ape: he took him home to his cell, and taught him to speak; and Prospero would have been very kind to him, but the bad nature which Caliban inherited from his mother Sycorax, would not let him learn anything good or useful: therefore he was employed like a slave, to fetch wood, and do the most laborious offices; and Ariel had the charge of compelling him to these services.

When Caliban was lazy and neglected his work, Ariel (who was invisible to all eyes but Prospero's) would come slily and pinch him, and sometimes tumble him down in the mire; and then Ariel, in the likeness of an ape, would make mouths at him. Then swiftly changing his shape, in the likeness of a hedgehog, he would lie tumbling in Caliban's way, who feared the hedgehog's sharp quills would prick his bare feet. With a variety of such-like vexatious tricks Ariel would often torment him, whenever Caliban neglected the work which Prospero commanded him to do.

Having these powerful spirits obedient to his will, Prospero could by their means command the winds, and the waves of the sea. By his orders they raised a violent storm, in the midst of which, and struggling with the wild sea-waves that every moment threatened to swallow it up, he showed his daughter a fine large ship, which he told her was full of living beings like themselves. "O my dear father," said she, "if by your art you have raised this dreadful storm, have pity on their sad distress. See! the vessel will be dashed to pieces. Poor souls! they will all perish. If I had power, I would sink the sea beneath the earth, rather than the good ship should be destroyed, with all the precious souls within her."

"Be not so amazed, daughter Miranda," said Prospero; "there is no harm done. I have so ordered it, that no person in the ship shall receive any hurt. What I have done has been in care of you, my dear child....