Studies in Occultism; A Series of Reprints from the Writings of H. P. Blavatsky No. 1: Practical Occultism-Occultism versus the Occult Arts-The Blessings of Publicity 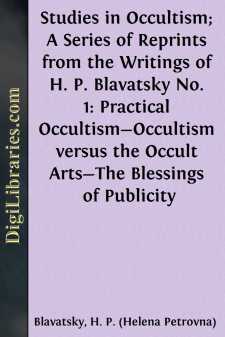 As some of the letters in the Correspondence of this month show, there are many people who are looking for practical instruction in Occultism. It becomes necessary, therefore, to state once for all:—

(a) The essential difference between theoretical and practical Occultism; or what is generally known as Theosophy on the one hand, and Occult science on the other, and:—

(b) The nature of the difficulties involved in the study of the latter.

It is easy to become a Theosophist. Any person of average intellectual capacities, and a leaning toward the metaphysical; of pure, unselfish life, who finds more joy in helping his neighbor than in receiving help himself; one who is ever ready to sacrifice his own pleasures for the sake of other people; and who loves Truth, Goodness, and Wisdom for their own sake, not for the benefit they may confer—is a Theosophist.

But it is quite another matter to put oneself upon the path which leads to the knowledge of what is good to do, as to the right discrimination of good from evil; a path which also leads a man to that power through which he can do the good he desires, often without even apparently lifting a finger.

Moreover, there is one important fact with which the student should be made acquainted. Namely, the enormous, almost limitless responsibility assumed by the teacher for the sake of the pupil. From the Gurus of the East who teach openly or secretly, down to the few Kabalists in Western lands who undertake to teach the rudiments of the Sacred Science to their disciples—those western Hierophants being often themselves ignorant of the danger they incur—one and all of these "Teachers" are subject to the same inviolable law. From the moment they begin really to teach, from the instant they confer any power—whether psychic, mental, or physical—on their pupils, they take upon themselves all the sins of that pupil, in connexion with the Occult Sciences, whether of omission or commission, until the moment when initiation makes the pupil a Master and responsible in his turn. There is a weird and mystic religious law, greatly reverenced and acted upon in the Greek, half-forgotten in the Roman Catholic, and absolutely extinct in the Protestant Church. It dates from the earliest days of Christianity and has its basis in the law just stated, of which it was a symbol and an expression. This is the dogma of the absolute sacredness of the relation between the god-parents who stand sponsors for a child.

These tacitly take upon themselves all the sins of the newly baptized child—(anointed, as at the initiation, a mystery truly!)—until the day when the child becomes a responsible unit, knowing good and evil. Thus it is clear why the "Teachers" are so reticent, and why "Chelas" are required to serve a seven years probation to prove their fitness, and develop the qualities necessary to the security of both Master and pupil.

Occultism is not magic. It is comparatively easy to learn the trick of spells and the methods of using the subtler, but still material, forces of physical nature; the powers of the animal soul in man are soon awakened; the forces which his love, his hate, his passion, can call into operation, are readily developed. But this is Black Magic—Sorcery. For it is the motive, and the motive alone, which makes any exercise of power become black, malignant, or white, beneficent Magic. It is impossible to employ spiritual forces if there is the slightest tinge of selfishness remaining in the operator. For, unless the intention is entirely unalloyed, the spiritual will transform itself into the psychic, act on the astral plane, and dire results may be produced by it. The powers and forces of animal nature can equally be used by the selfish and revengeful, as by the unselfish and the all-forgiving; the powers and forces of spirit lend themselves only to the perfectly pure in heart—and this is Divine Magic....