Studies in Central American Picture-Writing First Annual Report of the Bureau of Ethnology to the Secretary of the Smithsonian Institution, 1879-80, Government Printing Office, Washington, 1881, pages 205-245 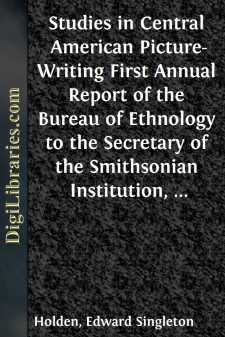 Since 1876 I have been familiar with the works of Mr. John L. Stephens on the antiquities of Yucatan, and from time to time I have read works on kindred subjects with ever increasing interest and curiosity in regard to the meaning of the hieroglyphic inscriptions on the stones and tablets of Copan, Palenque, and other ruins of Central America. In August, 1880, I determined to see how far the principles which are successful when applied to ordinary cipher-writing would carry one in the inscriptions of Yucatan. The difference between an ordinary cipher-message and these inscriptions is not so marked as might at first sight appear. The underlying principles of deciphering are quite the same in the two cases.

The chief difficulty in the Yucatec inscriptions is our lack of any definite knowledge of the nature of the records of the aborigines. The patient researches of our archæologists have recovered but very little of their manners and habits, and one has constantly to avoid the tempting suggestions of an imagination which has been formed by modern influences, and to endeavor to keep free from every suggestion not inherent in the stones themselves. I say the stones, for I have only used the Maya manuscripts incidentally. They do not possess, to me, the same interest, and I think it may certainly be said that all of them are younger than the Palenque tablets, and far younger than the inscriptions at Copan.

I therefore determined to apply the ordinary principles of deciphering, without any bias, to the Yucatec inscriptions, and to go as far as I could certainly. Arrived at the point where demonstration ceased, it would be my duty to stop. For, while even the conjectures of a mind perfectly trained in archæologic research are valuable and may subsequently prove to be quite right, my lack of familiarity with historical works forced me to keep within narrow and safe limits.

My programme at beginning was, first, to see if the inscriptions at Copan and Palenque were written in the same tongue. When I say “to see,” I mean to definitely prove the fact, and so in other cases; second, to see how the tablets were to be read. That is, in horizontal lines, are they to be read from right to left, or the reverse? In vertical columns, are they to be read up or down? Third, to see whether they were phonetic characters, or merely ideographic, or a mixture of the two—rebus-like, in fact.

If the characters turned out to be purely phonetic, I had determined to stop at this point, since I had not the time to learn the Maya language, and again because I utterly and totally distrusted the methods which, up to this time, have been applied by Brasseur de Bourbourg and others who start, and must start, from the misleading and unlucky alphabet handed down by Landa. I believe that legacy to have been a positive misfortune, and I believe any process of the kind attempted by Brasseur de Bourbourg (for example, in his essay on the MS. Troano) to be extremely dangerous and difficult in application, and to require a degree of scientific caution almost unique.

Dr. Harrison Allen, in his paper, “The Life Form in Art,” in the Transactions of the American Philosophical Society, is the only investigator who has applied this method to Central American remains with success, so it seems to me; and even here errors have occurred.

The process I allude to is something like the following: A set of characters, say the alphabet of Landa, is taken as a starting point. The variants of these are formed. Then the basis of the investigation is ready. From this, the interpretation follows by identifications of each new character with one of the standard set or with one of its variants. Theoretically, there is no objection to this procedure....