Social life at Rome in the Age of Cicero 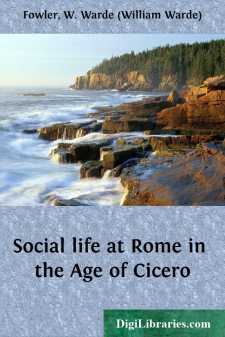 The modern traveller of to-day arriving at Rome by rail drives to his hotel through the uninteresting streets of a modern town, and thence finds his way to the Forum and the Palatine, where his attention is speedily absorbed by excavations which he finds it difficult to understand. It is as likely as not that he may leave Rome without once finding an opportunity of surveying the whole site of the ancient city, or of asking, and possibly answering the question, how it ever came to be where it is. While occupied with museums and picture-galleries, he may well fail "totam aestimare Romam."[1] Assuming that the reader has never been in Rome, I wish to transport him thither in imagination, and with the help of the map, by an entirely different route. But first let him take up the eighth book of the Aeneid, and read afresh the oldest and most picturesque of all stories of arrival at Rome;[2] let him dismiss all handbooks from his mind, and concentrate it on Aeneas and his ships on their way from the sea to the site of the Eternal City.

Virgil showed himself a true artist in bringing his hero up the Tiber, which in his day was freely used for navigation up to and even above the city. He saw that by the river alone he could land him exactly where he could be shown by his friendly host, almost at a glance, every essential feature of the site, every spot most hallowed by antiquity in the minds of his readers. Rowing up the river, which graciously slackened its swift current, Aeneas presently caught sight of the walls and citadel, and landed just beyond the point where the Aventine hill falls steeply almost to the water's edge. Here in historical times was the dockyard of Rome; and here, when the poet was a child, Cato had landed with the spoils of Cyprus, as the nearest point of the river for the conveyance of that ill-gotten gain to the treasury under the Capitol.[3] Virgil imagines the bank clothed with wood, and in the wood—where afterwards was the Forum Boarium, a crowded haunt—Aeneas finds Evander sacrificing at the Ara maxima of Hercules, of all spots the best starting-point for a walk through the heart of the ancient city. To the right was the Aventine, rising to about a hundred and thirty feet above the river, and this was the first of the hills of Rome to be impressed on the mind of the stranger, by the tale of Hercules and Cacus which Evander tells his guest. In front, but close by, was the long western flank of the Palatine hill, where, when the tale had been told and the rites of Hercules completed, Aeneas was to be shown the cave of the Lupercal; and again to the left, approaching the river within two hundred yards, was the Capitol to be:

Below it the hero is shown the shrine of the prophetic nymph Carmenta, with the Porta Carmentalis leading into the Campus Martius; then the hollow destined one day to be the Forum Romanum, and beyond it, in the valley of the little stream that here found its way down from the plain beyond, the grove of the Argiletum....