Slavery and Four Years of War, Vol. 1-2 A Political History of Slavery in the United States Together With a Narrative of the Campaigns and Battles of the Civil War In Which the Author Took Part: 1861-1865 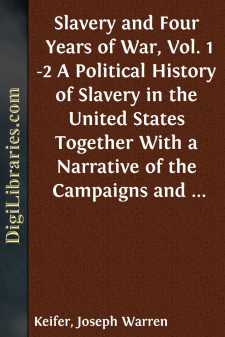 The writer of this book was a volunteer officer in the Union army throughout the war of the Great Rebellion, and his service was in the field.

The book, having been written while the author was engaged in a somewhat active professional life, lacks that literary finish which results from much pruning and painstaking. He, however, offers no excuse for writing it, nor for its completion; he has presumed to nothing but the privilege of telling his own story in his own way. He has been at no time forgetful of the fact that he was a subordinate in a great conflict, and that other soldiers discharged their duties as faithfully as himself; and while no special favors are asked, he nevertheless opes that what he has written may be accepted as the testimony of one who entertains a justifiable pride in having been connected with large armies and a participant in important campaigns and great battles.

He flatters himself that his summary of the political history of slavery in the United States, and of the important political events occurring upon the firing on Fort Sumter, and the account he has given of the several attempts to negotiate a peace before the final overthrow of the Confederate armies, will be of special interest to students of American history.

Slavery bred the doctrine of State-rights, which led, inevitably, to secession and rebellion. The story of slavery and its abolition in the United States is the most tragic one in the world's annals. The "Confederate States of America" is the only government ever attempted to be formed, avowedly to perpetuate human slavery. A history of the Rebellion without that of slavery is but a recital of brave deeds without reference to the motive which prompted their performance.

The chapter on slavery narrates its history in the United States from the earliest times; its status prior to the war; its effect on political parties and statesmen; its aggressions, and attempts at universal domination if not extension over the whole Republic; its inexorable demands on the friends of freedom, and its plan of perpetually establishing itself through secession and the formation of a slave nation. It includes a history of the secession of eleven Southern States, and the formation of "The Confederate States of America"; also what the North did to try to avert the Rebellion. It was written to show why and how the Civil War came, what the conquered lost, and what the victors won.

In other chapters the author has taken the liberty, for the sake of continuity, of going beyond the conventional limits of a personal memoir, but in doing this he has touched on no topic not connected with the war.

The war campaigns cover the first one in Western Virginia, 1861; others in Kentucky, Tennessee, Mississippi, and Alabama, 1862; in West Virginia, Virginia, Maryland, and Pennsylvania, 1863; and in Virginia, 1864; ending with the capture of Richmond and Petersburg, the battles of Five Forks and Sailor's Creek, and the surrender of Lee to Grant at Appomattox, 1865....