Sketch of the Mythology of the North American Indians First Annual Report of the Bureau of Ethnology to the Secretary of the Smithsonian Institution, 1879-80, Government Printing Office, Washington, 1881, pages 17-56 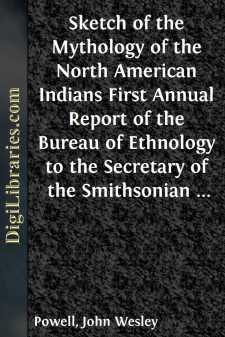 THE GENESIS OF PHILOSOPHY.

The wonders of the course of nature have ever challenged attention. In savagery, in barbarism, and in civilization alike, the mind of man has sought the explanation of things. The movements of the heavenly bodies, the change of seasons, the succession of night and day, the powers of the air, majestic mountains, ever-flowing rivers, perennial springs, the flight of birds, the gliding of serpents, the growth of trees, the blooming of flowers, the forms of storm-carved rocks, the mysteries of life and death, the institutions of society—many are the things to be explained. The yearning to know is universal. How and why are everlasting interrogatories profoundly instinct in humanity. In the evolution of the human mind, the instinct of cosmic interrogation follows hard upon the instinct of self-preservation.

In all the operations of nature, man's weal and woe are involved. A cold wave sweeps from the north—rivers and lakes are frozen, forests are buried under snows, and the fierce winds almost congeal the life-fluids of man himself, and indeed man's sources of supply are buried under the rocks of water. At another time the heavens are as brass, and the clouds come and go with mockery of unfulfilled promises of rain, the fierce midsummer sun pours its beams upon the sands, and blasts heated in the furnace of the desert sear the vegetation; and the fruits, which in more congenial seasons are subsistence and luxury, shrivel before the eyes of famishing men. A river rages and destroys the adjacent valley with its flood. A mountain bursts forth with its rivers of fire, the land is buried and the people are swept away. Lightning shivers a tree and rends a skull. The silent, unseen powers of nature, too, are at work bringing pain or joy, health or sickness, life or death, to mankind. In like manner man's welfare is involved in all the institutions of society. How and why are the questions asked about all these things—questions springing from the deepest instinct of self-preservation.

In all stages of savage, barbaric, and civilized inquiry, every question has found an answer, every how has had its thus, every why its because. The sum of the answers to the questions raised by any people constitute its philosophy; hence all peoples have had philosophies consisting of their accepted explanation of things. Such a philosophy must necessarily result from the primary instincts developed in man in the early progress of his differentiation from the beast. This I postulate: if demonstration is necessary, demonstration is at hand. Not only has every people a philosophy, but every stage of culture is characterized by its stage of philosophy. Philosophy has been unfolded with the evolution of the human understanding. The history of philosophy is the history of human opinions from the earlier to the later days—from the lower to the higher culture.

In the production of a philosophy, phenomena must be discerned, discriminated, classified. Discernment, discrimination, and classification are the processes by which a philosophy is developed....