Sinks of London Laid Open A Pocket Companion for the Uninitiated, to Which is Added a Modern Flash Dictionary Containing all the Cant Words, Slang Terms, and Flash Phrases Now in Vogue, with a List of the Sixty Orders of Prime Coves 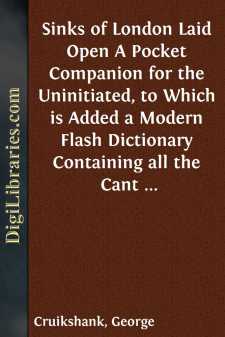 These two subjects are, perhaps now the only ones remaining, in what is termed the “walks of life,” of which a correct description has not yet been given. All the old topics, such as the beauties of the country, and the ancient stories of love and heroism, which have afforded so much employment to the pencil, the muse, and the worker-up of novels, have long been considered as the beaten track; and the relaters of fiction, at least those who lay claim to any thing like originality, have been fain to leave the romantic path, with its old castles and wondrous deeds, and so forth, and seek for heroes behind a counter, amidst the common-place details of business, and for scenes amongst the intricate windings of lanes and alleys. In short, novelty is the grand charm for this novel-writing age.

Independent of the hosts of “Military and Naval Sketches of Mr. Such-a-one,” “the Author of So-and-So’s Reminiscences,” &c., with the usual abundance of matter, that daily crowd from the press, we may notice amongst the really useful works that have lately appeared, the “Old Bailey Experience,” “Essays on the Condition of the People,” “the Dishonest Practices of Household Servants,” and “the Machinery of Crime in England, or the Connection between the Thieves and Flash Houses;” but, valuable as these articles are, and they are certainly of some importance to society, has there any one, we might ask, ever entered into the Common Lodging House,—the Vagabond’s Home,—a place that abounds in character and crime? The only information which we have had in these dens of poverty and vice, has been merely through the Police Reports, when some unfortunate defaulter had been taken out of one of those skulking-holes. On such occasions we are told, amongst the usual remarks, that the accommodation in those houses were exceedingly cheap, and that the lodgers herded together indiscriminately, &c.; but how such houses were really conducted, and of the manners and characters of most of the people who frequented them, the public may be said to be almost in perfect ignorance. In like manner with that fraternity called “Cadgers,” our knowledge has been equally limited. No correct account has ever yet been given of this idle, but cunning class of the community. All that we have been told concerning them, is, to use the common phrase, but mere hearsay. We remember reading, some few years ago, of one of those begging gentry boasting of being able to make five shillings a day. He considered that sixty streets were easily got through, from sunrise to sunset, and that it was strange indeed if he could not collect a penny in every street. Now, this very same anecdote we read, not many days since, in a new work, entitled, “A History of the Working Classes,” as something, of course, just brought to light.

The story, too, in that by-gone piece of notoriety, “Pierce Egan’s Life in London,” about the beggar’s opera, where the lame and the blind, and other disordered individuals, were said to meet nightly, in a place called the “back slums,” to throw off their infirmities, and laugh at the credulity of the public, was, not a great many weeks ago, trumped up into a paragraph in one of our weekly journals as a fact just discovered, and the curious were referred to a certain house in St....