Sane Sex Life and Sane Sex Living Some Things That All Sane People Ought to Know About Sex Nature and Sex Functioning; Its Place in the Economy of Life, Its Proper Training and Righteous Exercise 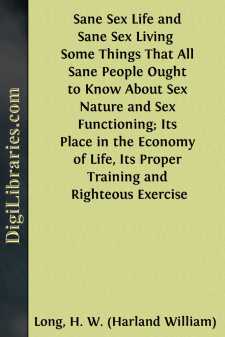 As we have moved down the ages, now and then, from the religious teacher, the statesman, the inventor, the social worker, or from the doctor, surgeon, or sexologist, there has been a "vox clamantis in deserto." Usually these voices have fallen on unheeding ears; but again and again some delver in books, some student of men, some inspired, self-effacing, or altruistic one has taken up the cry; and at last unthinking, unheeding, superficial, self-satisfied humanity has turned to listen.

Aristotle by the sure inductive method learned and taught much, concerning the sex relations of men and women, that it would profit us today to heed. Balzac, Luther, Michelet, Spencer, and later, at our very doors, Krafft-Ebbing, Forel, Bloch, Ellis, Freud, Hall, and scores of others have added their voices. All these have seen whither we were drifting, and have made vigorous protests according to their lights. Many of these protests should have been heard, but were not, and only now are just beginning to be heeded. Such pioneers in the field of proper, healthful, ethical, religious, sane daily sex living, have been Sturgis and Malchow, who talked earnestly to an unheeding profession of these things, and now, I have the honor to write an introductory word to a book in this field, that is sane, wise, practical, entirely truthful, and unspeakably necessary.

I can endorse the teachings in Dr. Long's book more fully because I have, for nearly a quarter of a century, been holding similar views, and dispensing similar, though perhaps less explicit, information. I know from long observation that the teaching is wholesome and necessary, and that the results are universally uplifting. Such teachings improve health, prolong life, and promote virtue, adding to the happiness and lessening the burdens of men, on the one hand; on the other, reducing their crimes and vices. A book like this would have proved invaluable to me on my entrance to the married state; but had I had it, I might not have been forced to acquire the knowledge which enables me now to state with all solemnity, that I personally know hundreds of couples whose lives were wrecked for lack of such knowledge, and that I more intimately know hundreds of others to whom verbal teaching along the lines he has laid down, has brought happiness, health and goodness.

Dr. Long advances no theories; neither do I. He has found by studying himself and other people, a sane and salutary way of sex living, and fearlessly has prescribed this to a limited circle for a long time. I congratulate him for his perspicacity, temerity, and wisdom. He offers no apology, and there is no occasion for any. He says, "All has been set down in love, by a lover, for the sake of lovers yet to be, in the hope of helping them on toward a divine consummation." That is, he has developed these ideas at home, and then spread them abroad, or, he has found them abroad and brought them home; and they worked.

I also speak somewhat ex experientia and have some intimate personal knowledge of many of these things....