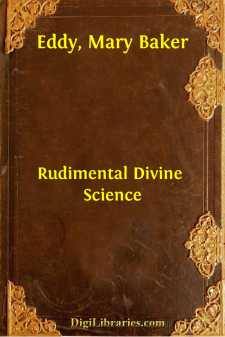 How would you define Christian Science?

As the law of God, the law of good, interpreting and demonstrating the divine Principle and rule of universal harmony.

What is the Principle of Christian Science?

It is God, the Supreme Being, infinite and immortal Mind, the Soul of man and the universe. It is our Father which is in heaven. It is substance, Spirit, Life, Truth, and Love,—these are the deific Principle.

Do you mean by this that God is a person?

The word person affords a large margin for misapprehension, as well as definition. In French the equivalent word is personne. In Spanish, Italian, and Latin, it is persona. The Latin verb personare is compounded of the prefix per (through) and sonare (to sound).

In law, Blackstone applies the word personal to bodily presence, in distinction from one's appearance (in court, for example) by deputy or proxy.

Other definitions of person, as given by Webster, are "a living soul; a self-conscious being; a moral agent; especially, a living human being, a corporeal man, woman, or child; an individual of the human race." He adds, that among Trinitarian Christians the word stands for one of the three subjects, or agents, constituting the Godhead.

In Christian Science we learn that God is definitely individual, and not a person, as that word is used by the best authorities, if our lexicographers are right in defining person as especially a finite human being; but God is personal, if by person is meant infinite Spirit.

We do not conceive rightly of God, if we think of Him as less than infinite. The human person is finite; and therefore I prefer to retain the proper sense of Deity by using the phrase an individual God, rather than a personal God; for there is and can be but one infinite individual Spirit, whom mortals have named God.

Science defines the individuality of God as supreme good, Life, Truth, Love. This term enlarges our sense of Deity, takes away the trammels assigned to God by finite thought, and introduces us to higher definitions.

Is healing the sick the whole of Science?

Healing physical sickness is the smallest part of Christian Science. It is only the bugle-call to thought and action, in the higher range of infinite goodness. The emphatic purpose of Christian Science is the healing of sin; and this task, sometimes, may be harder than the cure of disease; because, while mortals love to sin, they do not love to be sick. Hence their comparative acquiescence in your endeavors to heal them of bodily ills, and their obstinate resistance to all efforts to save them from sin through Christ, spiritual Truth and Love, which redeem them, and become their Saviour, through the flesh, from the flesh,—the material world and evil.

This Life, Truth, and Love—this trinity of good—was individualized, to the perception of mortal sense, in the man Jesus. His history is emphatic in our hearts, and it lives more because of his spiritual than his physical healing. His example is, to Christian Scientists, what the models of the masters in music and painting are to artists....