Rembrandt and His Works Comprising a Short Account of His Life; with a Critical Examination into His Principles and Practice of Design, Light, Shade, and Colour. Illustrated by Examples from the Etchings of Rembrandt. 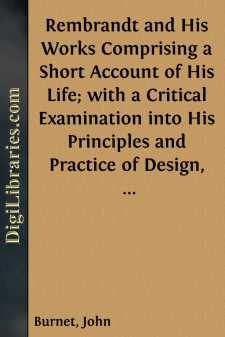 Add to My Favorites
Published: 9 years ago
Downloads: 135
Rating: (0 Votes)

The high estimation in which I have ever held the works of Rembrandt has been greatly increased by my going through this examination of his various excellencies, and such will ever be the case when the emanations of genius are investigated; like the lustre of precious stones, their luminous colour shines from the centre, not from the surface. With such a mine of rich ore as the works of Rembrandt contain, it is necessary to apologise for the paucity of examples offered, for in a work of this kind I have been obliged to confine myself to a certain brevity and a limited number of illustrations; still I must do my publisher the justice to say, he has not grudged any expense that would be the means of doing credit to the great artist, the enlightened patron, or my own reputation. Another circumstance has been elicited in preparing this work for publication—the great interest that all have shown in this humble attempt to make Rembrandt and his works more generally appreciated. His genius and productions seem to be congenial to the English taste. As a colourist he will ultimately lay the foundation of the British School of Painting, and prove the justice of Du Fresnoy's lines—

"He who colours well must colour bright;

Think not that praise to gain by sickly white."

Had it been possible, I would have given some examples of his colour as well as of his chiaro-scuro; but I found his great charm consists more in the tone of his colouring than its arrangement. I have mentioned in the body of the work that Sir Joshua, certainly the greatest master of colour we have yet had in England, frequently speaks ambiguously of many of Rembrandt's pictures. I am therefore bound to quote a remark that he makes to his praise. In his Memoranda he says—"I considered myself as playing a great game; and instead of beginning to save money, I laid it out faster than I got it, in purchasing the best examples of art that could be procured, for I even borrowed money for this purpose. The possession of pictures by Titian, Vandyke, Rembrandt, &c., I considered as the best kind of wealth."

With these remarks I must now launch the result of my labours, having had constantly in mind that feeling which an advocate has in a good cause, not to expect, by all his exertions, to increase the reputation of his client, but an anxiety not to damage it by his weakness. Before concluding I must again revert to the interest that all my friends have taken in the success of this publication; and though it may appear invidious to particularise any, I cannot omit mention of that enthusiastic admirer of Rembrandt, my young friend Mr. E. W. Cooke; the Messrs. Smith, of Lisle-street, the connoisseurs and extensive dealers in his Etchings; Mr. Carpenter, the keeper of the prints in the British Museum; and, lastly, my young literary friend, Mr. Peter Cunningham, who has, from the beginning, entered heartily into the cause of "Rembrandt and his Works."