Rambles of an Archaeologist Among Old Books and in Old Places Being Papers on Art, in Relation to Archaeology, Painting, Art-Decoration, and Art-Manufacture 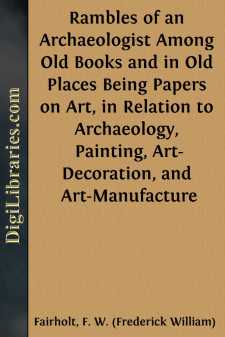 Long after the extinction of the practical art-power evolved from the master-minds of Greece and Rome, though rudely shattered by the northern tribes, it failed not to enforce from them an admission of its grandeur. Loving, as all rude nations do, so much of art as goes to the adornment of life, they also felt that there was a still higher aim in the enlarged spirit of classic invention. It is recorded that one of these ancient chieftains gazed thoughtfully in Rome upon the noble statuary of the fallen race, and declared it the work of men superior to any then remaining, and that all the creations of such lost power should be carefully preserved. The quaint imaginings of uncivilised art-workmanship bore the impress of a strong but ruder nature; elaboration took the place of elegance, magnificence that of grandeur. Slowly, as centuries evolved, the art-student came back to the purity of antique taste; but the process was a tardy one, each era preferring the impress of its own ideas: and though the grotesque contortions of mediæval statuary be occasionally modified by the influence of better art on the Gothic mind, it was not till the revival of the study of classic literature, in the fifteenth century, that men began to inquire into the art of the past ages, and endeavoured to obtain somewhat of its sacred fire for the use of their own time. The study was rewarded, and the style popularly known as that of the Renaissance rapidly spread its influence over the world of art, sanctioned by the favour of such master-minds as Raphael, and the great men of his era.

It was not, however, to be expected that any style should be resuscitated in all its purity without the admixture of some peculiarity emanating from the art which adopted it, and which was more completely the mode of the era. The Renaissance is, therefore, a Gothic classicality, engrafting classic form and freedom on the decorative quaintnesses of the middle ages. is as pertinent a specimen as could be obtained of this characteristic: the Greek volute and the Roman foliage are made to combine with the hideous inventions of monkery, the grotesque heads that are exhibited on the most sacred edifices, and which are simply the stone records of the strife and rivalry that prevailed between monks and friars up to the date of the Reformation, and are therefore of great value to the student of ecclesiology and ecclesiastical history. In this instance they seem to typify death and hell, over whom the Saviour was victorious by his mortal agony: the emblems of which occupy the central shield, and tell with much simple force the story of man’s redemption. Mediæval art has not unfrequently the merit of much condensation of thought, always particularly visible in its choice of types by which to express in a simple form a precise religious idea, at once appealing to the mind of the spectator, and bringing out a train of thought singularly diffuse when its slight origin is considered.