by The Seybert Commission 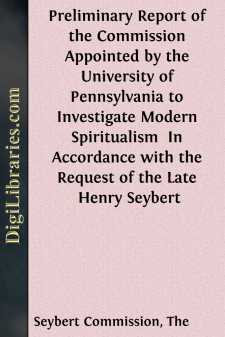 To the Trustees of The University of Pennsylvania:

'The Seybert Commission for Investigating Modern Spiritualism' respectfully present the following Preliminary Report, and request that the Commission be continued, on the following grounds:

The Commission is composed of men whose days are already filled with duties which cannot be laid aside, and who are able, therefore, to devote but a small portion of their time to these investigations. They are conscious that your honorable body look to them for a due performance of their task, and the only assurance which they can offer of their earnestness and zeal is in thus presenting to you, from time to time, such fragmentary Reports as the following, whereby they trust that successive steps in their progress may be marked. It is no small matter to be able to record any progress in a subject of so wide and deep an interest as the present. It is not too much to say that the farther our investigations extend the more imperative appears the demand for these investigations. The belief in so-called Spiritualism is certainly not decreasing. It has from the first assumed a religious tone, and now claims to be ranked among the denominational Faiths of the day.

From the outset your Commission have been deeply impressed with the seriousness of their undertaking, and have fully recognized that men eminent in intelligence and attainments yield to Spiritualism an entire credence, and who can fail to stand aside in tender reverence when crushed and bleeding hearts are seen to seek it for consolation and for hope? They beg that nothing which they may say may be interpreted as indicating indifference or levity. Wherever fraud in Spiritualism be found, that it is, and not whatever of truth there may be therein, which is denounced, and all Spiritualists who love the truth will join with us in condemnation of it.

The admission of evidence concerning the so-called Spiritual manifestations has been duly weighed. There is apparent force in the argument that our national histories are founded, accepted and trusted on evidence by no means as direct as that by which, it is claimed, the proofs of Spiritual miracles are accompanied. But it must be remembered that the facts of profane history are vouched for by evidence which is in accord with our present experience; they are in harmony with all that is now going on in the light of day (that history repeats itself has grown into a commonplace), and we are justified in accepting them on testimony, however indirect, which is nevertheless at one with the ordinary course of events. But the phenomena of Spiritualism have no such support; they are commonly regarded as in contravention of the ordinary experience of mankind (in that they are abnormal and extraordinary lies their very attractiveness to many people), and no indirect testimony concerning them can be admitted without the most thorough, the most searching scrutiny....