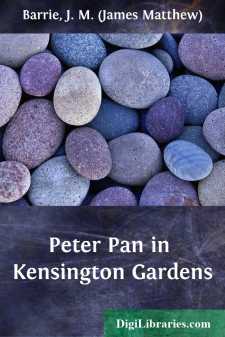 Add to My Favorites
Published: 8 years ago
Downloads: 71
Rating: (0 Votes)

THE GRAND TOUR OF THE GARDENS

You must see for yourselves that it will be difficult to follow Peter Pan's adventures unless you are familiar with the Kensington Gardens. They are in London, where the King lives, and I used to take David there nearly every day unless he was looking decidedly flushed. No child has ever been in the whole of the Gardens, because it is so soon time to turn back. The reason it is soon time to turn back is that, if you are as small as David, you sleep from twelve to one. If your mother was not so sure that you sleep from twelve to one, you could most likely see the whole of them.

The Gardens are bounded on one side by a never-ending line of omnibuses, over which your nurse has such authority that if she holds up her finger to any one of them it stops immediately. She then crosses with you in safety to the other side. There are more gates to the Gardens than one gate, but that is the one you go in at, and before you go in you speak to the lady with the balloons, who sits just outside. This is as near to being inside as she may venture, because, if she were to let go her hold of the railings for one moment, the balloons would lift her up, and she would be flown away. She sits very squat, for the balloons are always tugging at her, and the strain has given her quite a red face. Once she was a new one, because the old one had let go, and David was very sorry for the old one, but as she did let go, he wished he had been there to see.

The Hump, which is the part of the Broad Walk where all the big races are run

The Gardens are a tremendous big place, with millions and hundreds of trees; and first you come to the Figs, but you scorn to loiter there, for the Figs is the resort of superior little persons, who are forbidden to mix with the commonalty, and is so named, according to legend, because they dress in full fig. These dainty ones are themselves contemptuously called Figs by David and other heroes, and you have a key to the manners and customs of this dandiacal section of the Gardens when I tell you that cricket is called crickets here. Occasionally a rebel Fig climbs over the fence into the world, and such a one was Miss Mabel Grey, of whom I shall tell you when we come to Miss Mabel Grey's gate. She was the only really celebrated Fig.

We are now in the Broad Walk, and it is as much bigger than the other walks as your father is bigger than you. David wondered if it began little, and grew and grew, until it was quite grown up, and whether the other walks are its babies, and he drew a picture, which diverted him very much, of the Broad Walk giving a tiny walk an airing in a perambulator. In the Broad Walk you meet all the people who are worth knowing, and there is usually a grown-up with them to prevent them going on the damp grass, and to make them stand disgraced at the corner of a seat if they have been mad-dog or Mary-Annish. To be Mary-Annish is to behave like a girl, whimpering because nurse won't carry you, or simpering with your thumb in your mouth, and it is a hateful quality; but to be mad-dog is to kick out at everything, and there is some satisfaction in that....