Origin and Development of Form and Ornament in Ceramic Art. Fourth Annual Report of the Bureau of Ethnology to the Secretary of the Smithsonian Institution, 1882-1883, Government Printing Office, Washington, 1886, pages 437-466. 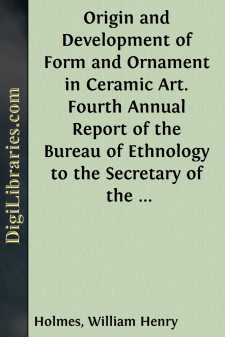 For the investigation of art in its early stages and in its widest sense—there is probably no fairer field than that afforded by aboriginal America, ancient and modern.

At the period of discovery, art at a number of places on the American continent seems to have been developing surely and steadily, through the force of the innate genius of the race, and the more advanced nations were already approaching the threshold of civilization; at the same time their methods were characterized by great simplicity, and their art products are, as a consequence, exceptionally homogeneous.

The advent of European civilization checked the current of growth, and new and conflicting elements were introduced necessarily disastrous to the native development.

There is much, however, in the art of living tribes, especially of those least influenced by the whites, capable of throwing light upon the obscure passages of precolumbian art. By supplementing the study of the prehistoric by that of historic art, which is still in many cases in its incipient stages, we may hope to penetrate deeply into the secrets of the past.

The advantages of this field, as compared with Greece, Egypt, and the Orient, will be apparent when we remember that the dawn of art in these countries lies hidden in the shadow of unnumbered ages, while ours stands out in the light of the very present. This is well illustrated by a remark of Birch, who, in dwelling upon the antiquity of the fictile art, says that "the existence of earthen vessels in Egypt was at least coeval with the formation of a written language." Beyond this there is acknowledged chaos. In strong contrast with this, is the fact that all precolumbian American pottery precedes the acquisition of written language, and this contrast is emphasized by the additional fact that it also antedates the use of the wheel, that great perverter of the plastic tendencies of clay.

The material presented in the following notes is derived chiefly from the native ceramic art of the United States, but the principles involved are applicable to all times and to all art, as they are based upon the laws of nature.

Ceramic art presents two classes of phenomena of importance in the study of the evolution of æsthetic culture. These relate, first, to form, and second, to ornament.

No form or class of forms can be said to characterize a particular age or stage of culture. In a general way, of course, the vessels of primitive peoples will be simple in form, while those of more advanced races will be more varied and highly specialized.

The shapes first assumed by vessels in clay depend upon the shape of the vessels employed at the time of the introduction of the art, and these depend, to a great extent, upon the kind and grade of culture of the people acquiring the art and upon the resources of the country in which they live....