Oriental Religions and Christianity A Course of Lectures Delivered on the Ely Foundation Before the Students of Union Theological Seminary, New York, 1891 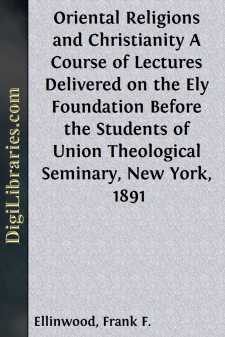 LECTURE I. THE NEED OF UNDERSTANDING THE FALSE RELIGIONS

It is said that the very latest among the sciences is the Science of Religion. Without pausing to inquire how far it admits of scientific treatment, certain reasons which may be urged for the study of the existing religions of the world will be considered in this lecture. It must be admitted in the outset that those who have been the pioneers in this field of research have not, as a rule, been advocates of the Christian faith. The anti-Christian theory that all religions may be traced to common causes, that common wants and aspirations of mankind have led to the development of various systems according to environment, has until recently been the chief spur to this class of studies. Accordingly, the religions of the world have been submitted to some preconceived philosophy of language, or ethnology, or evolution, with the emphasis placed upon such facts as seemed to comport with this theory. Meanwhile there has been an air of broad-minded charity in the manner in which the apologists of Oriental systems have treated the subject. They have included Christ in the same category with Plato and Confucius, and have generally placed Him at the head; and this supposed breadth of sentiment has given them a degree of influence with dubious and wavering Christians, as well as with multitudes who are without faith of any kind.

In this country the study of comparative religion has been almost entirely in the hands of non-evangelical writers. We have had "The Ten Great Religions," from the pen of Rev. James Freeman Clarke; "The Oriental Religions," written with great labor by the late Samuel Johnson; and Mr. Moncure D. Conway's "Anthology," with its flowers, gathered from the sacred books of all systems, and so chosen as to carry the implication that they all are equally inspired. Many other works designed to show that Christianity was developed from ancient sun myths, or was only a plagiarism upon the old mythologies of India, have been current among us. But strangely enough, the Christian Church has seemed to regard this subject as scarcely worthy of serious consideration. With the exception of a very able work on Buddhism,[1] and several review articles on Hinduism, written by Professor S.H. Kellogg, very little has been published from the Christian standpoint.[2] The term "heathenism" has been used as an expression of contempt, and has been applied with too little discrimination.

There is a reason, perhaps, why these systems have been underestimated. It so happened that the races among whom the modern missionary enterprise has carried on its earlier work were mostly simple types of pagans, found in the wilds of America, in Greenland and Labrador, in the West Indies, on the African coast, or in the islands of the Pacific; and these worshippers of nature or of spirits gave a very different impression from that which the Apostles and the Early Church gained from their intercourse with the conquering Romans or the polished and philosophic Greeks....