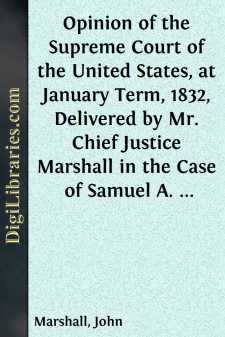 A writ of error was issued from the Supreme Court of the United States, directed to "the honorable the Judges of the Superior Court for the County of Gwinnett, in the State of Georgia," commanding them to "send to the said Supreme Court of the United States, the record and proceedings in the said Superior Court of the County of Gwinnett, between the State of Georgia, Plaintiff, and Samuel A. Worcester, Defendant, on an indictment in that Court."

This writ of error was returnable on the second Monday of January, 1832, and was attested by the Honorable Henry Baldwin, one of the Associate Justices of the Supreme Court of the United States.

A citation was issued, directed to "the State of Georgia," dated October 27, 1831, and signed by the Honorable Henry Baldwin, by which the said State was cited to show cause why the error in the judgment against Samuel A. Worcester, in the writ of error mentioned, if there was any error, should not be arrested, and why speedy justice should not be done to the parties in that behalf.

The citation was served on his Excellency Wilson Lumpkin, Governor of the State of Georgia, on the 24th November, 1831, and on Charles J. Jenkins, Esq. Attorney General of the said State, on the 22d November, 1831.

The writ of error was returned to the Supreme Court of the United States, with the record of the proceedings in the Court for the County of Gwinnett annexed thereto, and with the following certificate, under the seal of the Court:

I, John G. Park, Clerk of the Superior Court for the County of Gwinnett, and State aforesaid, do certify that the annexed and foregoing is a full and complete exemplification of the proceedings and judgment had in said Court, against Samuel A. Worcester, one of the Defendants in the case therein mentioned as of record in the said Superior Court.

The following is a copy of the Record: