On the Evolution of Language First Annual Report of the Bureau of Ethnology to the Secretary of the Smithsonian Institution, 1879-80, Government Printing Office, Washington, 1881, pages 1-16 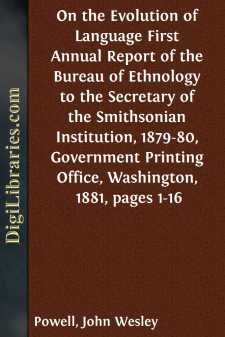 Two or more words may be united to form a new one, or to perform the office of a new one, and four methods or stages of combination may be noted.

a. By juxtaposition, where the two words are placed together and yet remain as distinct words. This method is illustrated in Chinese, where the words in the combination when taken alone seldom give a clew to their meaning when placed together.

b. By compounding, where two words are made into one, in which case the original elements of the new word remain in an unmodified condition, as in house-top, rain-bow, tell-tale.

c. By agglutination, in which case one or more of the elements entering into combination to form the new word is somewhat changed—the elements are fused together. Yet this modification is not so great as to essentially obscure the primitive words, as in truthful, where we easily recognize the original words truth and full; and holiday, in which holy and day are recognized.

d. By inflection. Here one or more of the elements entering into the compound has been so changed that it can scarcely be recognized. There is a constant tendency to economy in speech by which words are gradually shortened as they are spoken by generation after generation. In those words which are combinations of others there are certain elements that wear out more rapidly than others. Where some particular word is combined with many other different words the tendency to modify by wear this oft-used element is great. This is more especially the case where the combined word is used in certain categories of combinations, as where particular words are used to denote tense in the verb; thus, did may be used in combination with a verb to denote past time until it is worn down to the sound of d. The same wear occurs where particular words are used to form cases in nouns, and a variety of illustrations might be given. These categories constitute conjugations and declensions, and for convenience such combinations may be called paradigmatic. Then the oft-repeated elements of paradigmatic combinations are apt to become excessively worn and modified, so that the primitive words or themes to which they are attached seem to be but slightly changed by the addition. Under these circumstances combination is called inflection.

As a morphologic process, no well-defined plane of demarkation between these four methods of combination can be drawn, as one runs into another; but, in general, words may be said to be juxtaposed when two words being placed together the combination performs the function of a new word, while in form the two words remain separate.

Words may be said to be compound when two or more words are combined to form one, no change being made in either. Words maybe said to be agglutinated when the elementary words are changed but slightly, i.e., only to the extent that their original forms are not greatly obscured; and words may be said to be inflected when in the combination the oft-repeated element or formative part has been so changed that its origin is obscured....