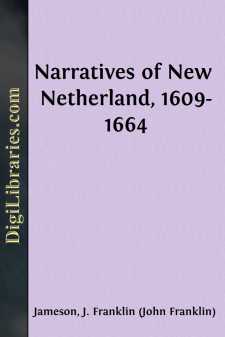 We have observed in our last book that the Directors of the East India Company in Holland had sent out in March last, on purpose to seek a passage to China by northeast or northwest, a skilful English pilot, named Henry Hudson, in a Vlie boat, having a crew of eighteen or twenty men, partly English, partly Dutch, well provided.

This Henry Hudson left the Texel on the 6th of April, 1609, doubled the Cape of Norway the 5th of May, and directed his course along the northern coasts towards Nova Zembia; but he there found the sea as full of ice as he had found it in the preceding year, so that they lost the hope of effecting anything during the season. This circumstance, and the cold, which some of his men, who had been in the East Indies, could not bear, caused quarrels among the crew, they being partly English, partly Dutch, upon which Captain Hudson laid before them two propositions. The first of these was to go to the coast of America, to the latitude of 40 degrees, moved thereto mostly by letters and maps which a certain Captain Smith had sent him from Virginia, and by which he indicated to him a sea leading into the western ocean, by the north of the southern English colony. Had this information been true (experience goes as yet to the contrary), it would have been of great advantage, as indicating a short way to India. The other proposition was to direct their search through Davis's Straits. This meeting with general approval, they sailed thitherward on the 14th of May, and arrived on the last day of May with a good wind at the Faroe Islands, where they stopped but twenty-four hours, to supply themselves with fresh water. After leaving these islands, they sailed on, till on the 18th of July they reached the coast of Nova Francia, under 44 degrees, where they were obliged to run in, in order to get a new foremast, having lost theirs. They found one, and set it up. They found this a good place for cod-fishing, as also for traffic in good skins and furs, which were to be got there at a very low price. But the crew behaved badly towards the people of the country, taking their property by force, out of which there arose quarrels among themselves. The English, fearing that between the two they would be outnumbered and worsted, were therefore afraid to pursue the matter further. So they left that place on the 26th of July, and kept out at sea till the 3d of August, when they came near the coast, in 42 degrees of latitude. Thence they sailed on, till on the 12th of August they again reached the shore, under 37 degrees 45'. Thence they sailed along the shore until they reached 40 degrees 45', where they found a good entrance, between two headlands, and entered on the 12th of September into as fine a river as can be found, wide and deep, with good anchoring ground on both sides....