Mexico and its Religion With Incidents of Travel in That Country During Parts of the Years 1851-52-53-54, and Historical Notices of Events Connected With Places Visited 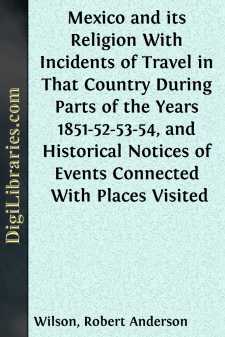 The evidence that I have adduced to prove that the yellow fever is not an American, but an African disease, imported in slave-ships, and periodically renewed from those cargoes of human rottenness and putrefaction, I hope will be duly considered.

The picture of inner convent life, and the inimitable gambling scene in the convent of San Francis, I have not dared to present on my own responsibility, nor even that of the old English black-letter edition of Friar Thomas, but I have reproduced it from the expurgated Spanish edition, which has passed the censors, and must therefore be considered official.

I have presumed to follow the great Las Casas, who called all the historians of the Conquest of Mexico liars; and though his labored refutation of their fictions has disappeared, yet, fortunately, the natural evidences of their untruth still remain. Having before me the surveys and the levels of our own engineers, I have presumed to doubt that water ever ran up hill, that navigable canals were ever fed by "back water," that pyramids (teocalli) could rest on a foundation of soft earth, that a canal twelve feet broad by twelve feet deep, mostly below the water level, was ever dug by Indians with their rude implements, that gardens ever floated in mud, or that brigantines ever sailed in a salt marsh, or even that 100,000 men ever entered the mud-built city of Mexico by a narrow causeway in the morning, and after fighting all day returned by the same path at night to their camp, or that so large a besieging army as 150,000 men could be supported in a salt-marsh valley, surrounded by high mountains.

In answer to the question why such fables have so long passed for history, I have the ready answer, that the Inquisition controlled every printing-office in Spain and her colonies, and its censors took good care that nothing should be printed against the fair fame of so good a Christian as Cortéz, who had painted upon his banner an image of the Immaculate Virgin, and had bestowed upon her a large portion of his robbery; who had gratified the national taste for holy wars by writing one of the finest of Spanish romances of history; who had induced the Emperor to overlook his crime of levying war without a royal license by the bestowal of rich presents and rich provinces; so that, by the favor of the Emperor and the favor of the Inquisition, a filibustero, whose atrocities surpassed those of every other on record, has come down to us as a Christian hero.

The innumerable little things about their Indian mounds force the conviction on the experienced eye of an American traveler that the Aztecs were a horde of North American savages, who had precipitated themselves first upon the table-land, and afterward, like the Goths from the table-lands of Spain, extended their conquests over the expiring civilization of the coast country; and this idea is confirmed by the fact that the magnificent Toltec monuments of a remote antiquity, discovered in the tropical forests, were apparently unknown to the Aztecs....