Memoirs of Arthur Hamilton, B. A. Of Trinity College, Cambridge Extracted From His Letters And Diaries, With Reminiscences Of His Conversation By His Friend Christopher Carr Of The Same College 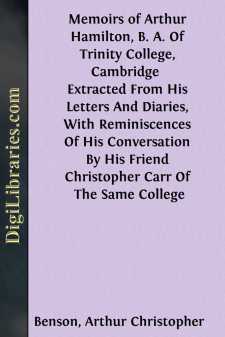 He was born November 2, 1852. He was the second son of a retired cavalry officer, who lived in Hampshire. Besides his elder brother, there were three sisters, one of whom died. His father was a wealthy man, and had built himself a small country house, and planted the few acres of ground round it very skillfully. Major Hamilton was a very religious man, of the self-sufficient, puritanical, and evangelical type, that issues from discipline; a martinet in his regiment, a domestic tyrant, without intending to be. He did not marry till rather late in life; and at the time when Arthur was growing up—the time when memory intwines itself most lingeringly with its surroundings, the time which comes back to us at ecstatic moments in later, sadder days—all the entourage of the place was at its loveliest. Nothing ever equalled the thrill, he has told me, of finding the first thrush's nest in the laurels by the gate, or of catching the first smell of the lilac bushes in spring, or the pungent scent of the chamomile and wild celery down by the little stream.

The boy acquired a great love for Nature, though not of the intimate kind that poets have by instinct. "In moments of grief and despair," he wrote in later life, "I do not, as some do, crouch back to the bosom of the great Mother; she has, it seems, no heart for me when I am sorry, though she smiles with me when I am glad." But he has told me that he is able to enjoy a simple village scene in a way that others can not easily understand: a chestnut crowded with pink spires, the clack of a mill-wheel, the gush of a green sluice out of a mantled pool, a little stream surrounded by flags and water lobelias, gave him all his life a keen satisfaction in his happy moments. "I always gravitate to water," he writes. "I could stop and look at a little wayside stream for hours; and a pool—I never tire of it, though it awes me when I am alone."

The boy was afraid of trees, as many children are. If he had to go out alone he always crossed the fields, and never went by the wood; wandering in a wood at night was a childish nightmare of a peculiarly horrible kind.

I quote a few childish stories about him, selecting them out of a large number.

His mother saying to him one day that the gardener was dead, he burst out laughing (with that curious hysteria so common in children), and then after a little asked if they were going to bury him.

His mother, wishing to familiarize him with the idea of continued existence after death, dwelt on the fact that it was only his body that was going to be buried: his soul was in heaven.

The boy said presently, "If his body is in the churchyard, and his soul in heaven, where is David?"

Upon which his mother sent him down to the farm.

He was often singularly old-fashioned in his ways. If he was kept indoors by a childish ailment, he would draw his chair up to the fire, by his nurse, and say, "Now that the children are gone out, nurse, we can have a quiet talk." And he always returned first of all his brothers and sisters, if they were playing in the garden, that he might have the pleasure of clapping his hands from the nursery window to summon them in....