Mary Schweidler, $b the amber witch $c: the most interesting trial for witchcraft ever known, printed from an imperfect manuscript by her father, Abraham Schweidler, the pastor of Coserow in the island of Usedom / edited by W. Meinhold ; translated from the German by Lady Duff Gordon. 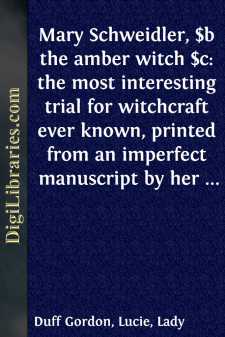 In laying before the public this deeply affecting and romantic trial, which I have not without reason called on the title-page the most interesting of all trials for witchcraft ever known, I will first give some account of the history of the manuscript.

At Coserow, in the Island of Usedom, my former cure, the same which was held by our worthy author some two hundred years ago, there existed under a seat in the choir of the church a sort of niche, nearly on a level with the floor. I had, indeed, often seen a heap of various writings in this recess; but owing to my short sight, and the darkness of the place, I had taken them for antiquated hymn-books, which were lying about in great numbers. But one day, while I was teaching in the church, I looked for a paper mark in the Catechism of one of the boys, which I could not immediately find; and my old sexton, who was past eighty (and who, although called Appelmann, was thoroughly unlike his namesake in our story, being a very worthy, although a most ignorant man), stooped down to the said niche, and took from it a folio volume which I had never before observed, out of which he, without the slightest hesitation, tore a strip of paper suited to my purpose, and reached it to me. I immediately seized upon the book, and, after a few minutes' perusal, I know not which was greater, my astonishment or my vexation at this costly prize. The manuscript, which was bound in vellum, was not only defective both at the beginning and at the end, but several leaves had even been torn out here and there in the middle. I scolded the old man as I had never done during the whole course of my life; but he excused himself, saying that one of my predecessors had given him the manuscript for waste paper, as it had lain about there ever since the memory of man, and he had often been in want of paper to twist round the altar candles, etc. The aged and half-blind pastor had mistaken the folio for old parochial accounts which could be of no more use to any one.[1]

No sooner had I reached home than I fell to work upon my new acquisition, and after reading a bit here and there with considerable trouble, my interest was powerfully excited by the contents.

I soon felt the necessity of making myself better acquainted with the nature and conduct of these witch trials, with the proceedings, nay, even with the history of the whole period in which these events occur. But the more I read of these extraordinary stories, the more was I confounded; and neither the trivial Beeker (die bezauberte Welt, the enchanted world), nor the more careful Horst (Zauberbibliothek, the library of magic), to which, as well as to several other works on the same subject, I had flown for information, could resolve my doubts, but rather served to increase them.

Not alone is the demoniacal character, which pervades nearly all these fearful stories, so deeply marked, as to fill the attentive reader with feelings of alternate horror and dismay, but the eternal and unchangeable laws of human feeling and action are often arrested in a manner so violent and unforeseen, that the understanding is entirely baffled....