Letters on the Nicobar islands, their natural productions, and the manners, customs, and superstitions of the natives with an account of an attempt made by the Church of the United Brethren, to convert them to Christianity 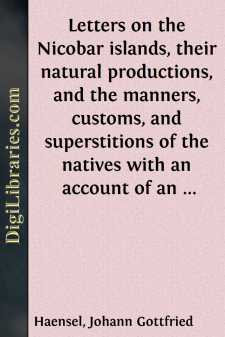 Your obliging inquiries concerning the attempt made by the Church of the United Brethren, to establish a mission in the Nicobar Islands, I have not been able hitherto to answer as fully as I wished, the documents in my possession being few and unconnected, and a reference to Crantz's History of the Brethren, p. 504 and 614, furnishing but a short notice of the commencement of that undertaking. The difficulty attending our correspondence with our Brethren on the Continent, has likewise so much increased, that I cannot expect to be soon supplied with more detailed accounts from our archives; and the continuation of Crantz's History, in which a concise report of the progress of the mission is inserted, is not translated into English. I was glad therefore unexpectedly to meet with an opportunity of conversing with John Gottfried Haensel, a missionary from St. Thomas in the West Indies, who was formerly employed in the Nicobar mission, and resided for seven years in the island of Nancauwery. This worthy veteran has spent eighteen years in the East, and seventeen in the West Indies, and altogether thirty-eight years in the service of the Brethren's missions; yet by God's blessing, after suffering numberless hardships and dangerous illnesses, at the age of sixty-three he remains a most active, cheerful, and zealous labourer in the Lord's vineyard.

In the course of our frequent conversations on various subjects, relating to the occurrences of his past life, he interspersed so many curious and interesting particulars concerning his residence in the Nicobar Islands; that I could not help requesting him to commit them to writing, as they might occur to his recollection. This he very obligingly consented to do; and though, by my particular desire, he did not study to make out a complete history, the labour and formality of which might have suppressed, in a great degree, the liveliness of his manner, but left the arrangement of the subjects to me; yet I am of opinion, that you will read what he has written with pleasure, and esteem these fragments worthy of preservation. Many of your questions will be pretty satisfactorily answered by them, and I have therefore translated them for your perusal. They exhibit a degree of patience and perseverance in the prosecution of missionary labours, in hope against hope, such as has hardly been exceeded in our Greenland and North American missions, with the history of which you are acquainted.

The mission of the United Brethren in the Nicobar Islands, was undertaken in the year 1758. A person of high rank at the court of Denmark, having intimated to the directors of the Brethren's missions, that it would give particular pleasure to the King, if some of their missionaries would settle on the Nicobar Islands, and endeavour to instruct the inhabitants in the principles of the Christian religion; they resolved to comply with his Majesty's wishes.

A commercial establishment had been formed on these islands in 1756, when the name of Frederic's Islands was given to them; but the first attempt miscarried, and almost all the colonists sent thither from Tranquebar, soon died....