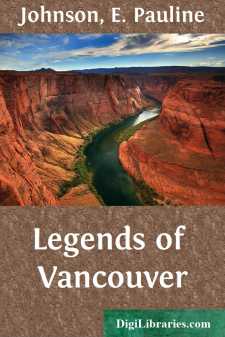 E. Pauline Johnson (Tekahionwake) is the youngest child of a family of four born to the late G. H. M. Johnson (Onwanonsyshon), Head Chief of the Six Nations Indians, and his wife Emily S. Howells. The latter was of English parentage, her birthplace being Bristol, but the land of her adoption Canada.

Chief Johnson was of the renowned Mohawk tribe, being a scion of one of the fifty noble families which composed the historical confederation founded by Hiawatha upwards of four hundred years ago, and known at that period as the Brotherhood of the Five Nations, but which was afterwards named the Iroquois by the early French missionaries and explorers. For their loyalty to the British Crown they were granted the magnificent lands bordering the Grand River, in the County of Brant, Ontario, on which the tribes still live.

It was upon this Reserve, on her father's estate, "Chiefswood," that Pauline Johnson was born. The loyalty of her ancestors breathes in her prose, as well as in her poetic writings.

Her education was neither extensive nor elaborate. It embraced neither high school nor college. A nursery governess for two years at home, three years at an Indian day school half a mile from her home, and two years in the Central School of the city of Brantford, was the extent of her educational training. But, besides this, she acquired a wide general knowledge, having been through childhood and early girlhood a great reader, especially of poetry. Before she was twelve years old she had read Scott, Longfellow, Byron, Shakespeare, and such books as Addison's "Spectator," Foster's Essays and Owen Meredith's writings.

The first periodicals to accept her poems and place them before the public were "Gems of Poetry," a small magazine published in New York, and "The Week," established by the late Prof. Goldwin Smith, of Toronto, the New York "Independent" and Toronto "Saturday Night." Since then she has contributed to most of the high-grade magazines, both on this continent and England.

Her writings having brought her into notice, the next step in Miss Johnson's career was her appearance on the public platform as a reciter of her own poems. For this she had natural talent, and in the exercise of it she soon developed a marked ability, joined with a personal magnetism, that was destined to make her a favorite with audiences from the Atlantic to the Pacific. Her friend, Mr. Frank Yeigh, of Toronto, provided for a series of recitals having that scope, with the object of enabling her to go to England to arrange for the publication of her poems. Within two years this aim was accomplished, her book of poems, "The White Wampum," being published by John Lane, of the Bodley Head. She took with her numerous letters of introduction, including one from the Governor-General, the Earl of Aberdeen, and she soon gained both social and literary standing. Her book was received with much favor, both by reviewers and the public. After giving many recitals in fashionable drawing-rooms, she returned to Canada, and made her first tour to the Pacific Coast, giving recitals at all the cities and towns en route. Since then she has crossed the Rocky Mountains no fewer than nineteen times.

Miss Johnson's pen had not been idle, and in 1903 the George Morang Co., of Toronto, published her second book of poems, entitled "Canadian Born," which was also well received....