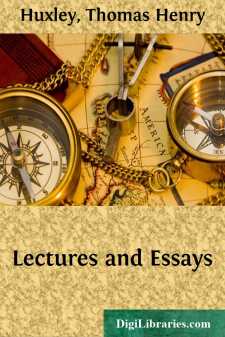 When it was my duty to consider what subject I would select for the six lectures* ([Footnote] *To Working Men, at the Museum of Practical Geology, 1863.) which I shall now have the pleasure of delivering to you, it occurred to me that I could not do better than endeavour to put before you in a true light, or in what I might perhaps with more modesty call, that which I conceive myself to be the true light, the position of a book which has been more praised and more abused, perhaps, than any book which has appeared for some years;—I mean Mr. Darwin's work on the "Origin of Species". That work, I doubt not, many of you have read; for I know the inquiring spirit which is rife among you. At any rate, all of you will have heard of it,—some by one kind of report and some by another kind of report; the attention of all and the curiosity of all have been probably more or less excited on the subject of that work. All I can do, and all I shall attempt to do, is to put before you that kind of judgment which has been formed by a man, who, of course, is liable to judge erroneously; but, at any rate, of one whose business and profession it is to form judgments upon questions of this nature.

And here, as it will always happen when dealing with an extensive subject, the greater part of my course—if, indeed, so small a number of lectures can be properly called a course—must be devoted to preliminary matters, or rather to a statement of those facts and of those principles which the work itself dwells upon, and brings more or less directly before us. I have no right to suppose that all or any of you are naturalists; and even if you were, the misconceptions and misunderstandings prevalent even among naturalists on these matters would make it desirable that I should take the course I now propose to take,—that I should start from the beginning,—that I should endeavour to point out what is the existing state of the organic world,—that I should point out its past condition,—that I should state what is the precise nature of the undertaking which Mr. Darwin has taken in hand; that I should endeavour to show you what are the only methods by which that undertaking can be brought to an issue, and to point out to you how far the author of the work in question has satisfied those conditions, how far he has not satisfied them, how far they are satisfiable by man, and how far they are not satisfiable by man.

To-night, in taking up the first part of this question, I shall endeavour to put before you a sort of broad notion of our knowledge of the condition of the living world. There are many ways of doing this. I might deal with it pictorially and graphically. Following the example of Humboldt in his "Aspects of Nature", I might endeavour to point out the infinite variety of organic life in every mode of its existence, with reference to the variations of climate and the like; and such an attempt would be fraught with interest to us all; but considering the subject before us, such a course would not be that best calculated to assist us. In an argument of this kind we must go further and dig deeper into the matter; we must endeavour to look into the foundations of living Nature, if I may so say, and discover the principles involved in some of her most secret operations. I propose, therefore, in the first place, to take some ordinary animal with which you are all familiar, and, by easily comprehensible and obvious examples drawn from it, to show what are the kind of problems which living beings in general lay before us; and I shall then show you that the same problems are laid open to us by all kinds of living beings. But first, let me say in what sense I have used the words "organic nature." In speaking of the causes which lead to our present knowledge of organic nature, I have used it almost as an equivalent of the word "living," and for this reason,—that in almost all living beings you can distinguish several distinct portions set apart to do particular things and work in a particular way. These are termed "organs," and the whole together is called "organic." And as it is universally characteristic of them, this term "organic" has been very conveniently employed to denote the whole of living nature,—the whole of the plant world, and the whole of the animal world....