Journals of Expeditions of Discovery into Central Australia and Overland from Adelaide to King George's Sound in the Years 1840-1: Sent By the Colonists of South Australia, with the Sanction and Support of the Government: Including an Account of the Manners and Customs of the Aborigines and the State of Their Relations with Europeans - Volume 01 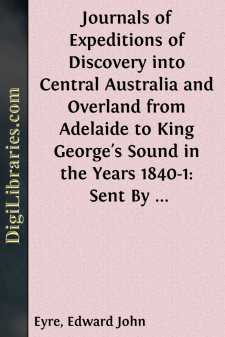 To enable the reader to judge of the author's capabilities for the task he undertook, and of the degree of confidence that may be due to his impressions or opinions, it may not be out of place to state, that the Expeditions of 1840--1 were not entered upon without a sufficient previous and practical experience in exploring.

For eight years the author had been resident in Australia, during which he had visited many of the located parts of New South Wales, Port Phillip, South Australia, Western Australia, and Van Diemen's Land. In the years 1836, 1837, 1838, 1839, and 1840 he had conducted expeditions across from Liverpool Plains in New South Wales to the county of Murray, from Sydney to Port Phillip, from Port Phillip to Adelaide, and from King George's Sound to Swan River, besides undertaking several explorations towards the interior, both from Port Lincoln and from Adelaide....