Indiscreet Letters From Peking Being the Notes of an Eye-Witness, Which Set Forth in Some Detail, from Day to Day, the Real Story of the Siege and Sack of a Distressed Capital in 1900-The Year of Great Tribulation 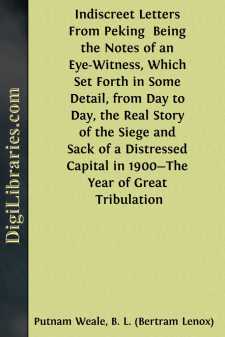 The weather is becoming hot, even here in latitude 40 and in the month of May. The Peking dust, distinguished among all the dusts of the earth for its blackness, its disagreeable insistence in sticking to one's clothes, one's hair, one's very eyebrows, until a grey-brown coating its visible to every eye, is rising in heavier clouds than ever. In the market-places, and near the great gates of the city, where Peking carts and camels from beyond the passes—k'ou wai, to use the correct vernacular—jostle one another, the dust has become damnable beyond words, and there can be no health possibly in us. The Peking dust rises, therefore, in clouds and obscures the very sun at times; for the sun always shines here in our Northern China, except during a brief summer rainy season, and a few other days you can count on your fingers. The dust is without significance, you will say, since it is always there more or less. It is in any case—healthy; it chokes you, but is reputed also to choke germs; therefore it is good. All of which is true, only this year there is more of it than ever, meaning very dry weather indeed for this city, hanging near the gates of Mongolian deserts—a dry weather spelling the devil for the Northern farmer.

Meanwhile, is there anything special for me to chronicle? Not much, although there is a cloud no bigger than your hand in Shantung not a thousand miles from Weihaiwei, and the German Legation is consequently somewhat irate. It was noticed at our club, for instance, which, by the way, is a humble affair, that the German military attaché, a gentleman who wears bracelets, is somewhat effeminate, and plays vile tennis and worse billiards, had a "hostile attitude" towards the British Legation—that is, such of the British Legation as gather together each day at the "ice-shed"—which happens to be the club's peculiar Chinese name. The military attaché is somewhat irate, because the spectacle of the Weihaiwei regiment, six hundred yellow men under twelve white Englishmen, chasing malcontents in Shantung, is derogatory to Teutonic aspirations. Germany has earmarked Shantung, and it is just like English bluntness to remind the would-be dominant Power that there is a British sphere and a British colony in the Chinese province, as well as a German sphere and a German colony. But the German Minister, a beau garçon with blue eyes and a handsome moustache, says nothing, and is quite calm.

Meanwhile the cloud no bigger than your hand is quite unremarked by the rank and file of Legation Street—that I will swear. Chinese malcontents—"the Society of Harmonious Fists," particular habitat Shantung province—are casually mentioned; but it is remembered that the provincial governor of Shantung is a strong Chinaman, one Yuan Shih-kai, who has some knowledge of military matters, and, better still, ten thousand foreign-drilled troops. Shantung is all right, never fear—such is the comment of the day.

But the political situation—the situation politique as we call it in our several conversations, which always have a diplomatic turn—although not grave, is unhappy; everybody at least acknowledges that....