How To Write Special Feature Articles A Handbook for Reporters, Correspondents and Free-Lance Writers Who Desire to Contribute to Popular Magazines and Magazine Sections of Newspapers 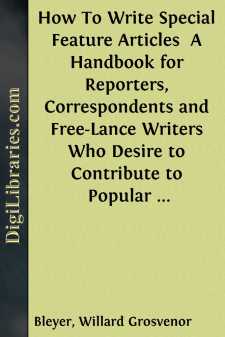 CHAPTER I THE FIELD FOR SPECIAL ARTICLES

Origin of Special Articles. The rise of popular magazines and of magazine sections of daily newspapers during the last thirty years has resulted in a type of writing known as the "special feature article." Such articles, presenting interesting and timely subjects in popular form, are designed to attract a class of readers that were not reached by the older literary periodicals. Editors of newspapers and magazines a generation ago began to realize that there was no lack of interest on the part of the general public in scientific discoveries and inventions, in significant political and social movements, in important persons and events. Magazine articles on these themes, however, had usually been written by specialists who, as a rule, did not attempt to appeal to the "man in the street," but were satisfied to reach a limited circle of well-educated readers.

To create a larger magazine-reading public, editors undertook to develop a popular form and style that would furnish information as attractively as possible. The perennial appeal of fiction gave them a suggestion for the popularization of facts. The methods of the short story, of the drama, and even of the melodrama, applied to the presentation of general information, provided a means for catching the attention of the casual reader.

Daily newspapers had already discovered the advantage of giving the day's news in a form that could be read rapidly with the maximum degree of interest by the average man and woman. Certain so-called sensational papers had gone a step further in these attempts to give added attractiveness to news and had emphasized its melodramatic aspects. Other papers had seen the value of the "human interest" phases of the day's happenings. It was not surprising, therefore, that Sunday editors of newspapers should undertake to apply to special articles the same methods that had proved successful in the treatment of news.

The product of these efforts at popularization was the special feature article, with its story-like form, its touches of description, its "human interest," its dramatic situations, its character portrayal—all effectively used to furnish information and entertainment for that rapid reader, the "average American."

Definition of a Special Article. A special feature article may be defined as a detailed presentation of facts in an interesting form adapted to rapid reading, for the purpose of entertaining or informing the average person. It usually deals with (1) recent news that is of sufficient importance to warrant elaboration; (2) timely or seasonal topics not directly connected with news; or (3) subjects of general interest that have no immediate connection with current events.

Although frequently concerned with news, the special feature article is more than a mere news story. It aims to supplement the bare facts of the news report by giving more detailed information regarding the persons, places, and circumstances that appear in the news columns. News must be published as fast as it develops, with only enough explanatory material to make it intelligible. The special article, written with the perspective afforded by an interval of a few days or weeks, fills in the bare outlines of the hurried news sketch with the life and color that make the picture complete.

The special feature article must not be confused with the type of news story called the "feature," or "human interest," story. The latter undertakes to present minor incidents of the day's news in an entertaining form. Like the important news story, it is published immediately after the incident occurs. Its purpose is to appeal to newspaper readers by bringing out the humorous and pathetic phases of events that have little real news value. It exemplifies, therefore, merely one distinctive form of news report.

The special feature article differs from the older type of magazine article, not so much in subject as in form and style. The most marked difference lies in the fact that it supplements the recognized methods of literary and scientific exposition with the more striking devices of narrative, descriptive, and dramatic writing.

Scope of Feature Articles. The range of subjects for special articles is as wide as human knowledge and experience. Any theme is suitable that can be made interesting to a considerable number of persons. A given topic may make either a local or a general appeal. If interest in it is likely to be limited to persons in the immediate vicinity of the place with which the subject is connected, the article is best adapted to publication in a local newspaper....