History of Cuba; or, Notes of a Traveller in the Tropics Being a Political, Historical, and Statistical Account of the Island, from its First Discovery to the Present Time 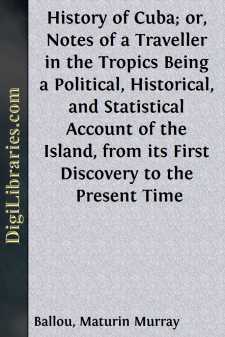 The island of Cuba, one of the earliest discoveries of the great admiral, has been known to Europe since 1492, and has borne, successively, the names of Juana, Fernandina, Santiago and Ave Maria, having found refuge at last in the aboriginal appellation. Soon after its discovery by Columbus, it was colonized by Spaniards from St. Domingo, but was considered mainly in the light of a military depôt, by the home government, in its famous operations at that period in Mexico. The fact that it was destined to prove the richest jewel in the Castilian crown, and a mine of wealth to the Spanish treasury, was not dreamed of at this stage of its history. Even the enthusiastic followers of Cortez, who sought that fabulous El Dorado of the New World, had no golden promise to hold forth for this gem of the Caribbean Sea.

The Spanish colonists from St. Domingo found the island inhabited by a most peculiar native race, hospitable, inoffensive, timid, fond of the dance and the rude music of their own people, yet naturally indolent and lazy, from the character of the climate they inhabited. They had some definite idea of God and heaven; and were governed by patriarchs, or kings, whose word was law, and whose age gave them precedence. They had few weapons of offence or defence, and knew not the use of the bow and arrow. Of course, they were at once subjected by the new comers, who reduced them to a state of slavery; and, proving hard taskmasters, the poor, over-worked natives died in scores, until they had nearly disappeared, when the home government granted permission to import a cargo of negroes from the coast of Africa to labor upon the ground, and to seek for gold, which was thought to exist in the river-courses. Thus early commenced the slave-trade of Cuba, a subject to which we shall have occasion more fully to refer.

Cuba became the head-quarters of the Spanish power in the west, forming the point of departure for those military expeditions which, though inconsiderable in numbers, were so formidable in the energy of the leaders, and in the arms, discipline, courage, ferocity, fanaticism and avarice, of their followers, that they were amply adequate to carry out the vast schemes of conquest for which they were designed. It was hence that Cortez marched to the conquest of Mexico,—a gigantic undertaking—one a slight glance at which will recall to the reader the period of history to which we would direct his attention....