Heads and Tales : or, Anecdotes and Stories of Quadrupeds and Other Beasts, Chiefly Connected with Incidents in the Histories of More or Less Distinguished Men. 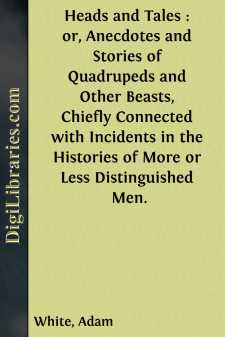 In this collection, like Linnæus, we begin with man as undoubtedly an animal, as opposed to a vegetable or mineral. Like Professor Owen, we are inclined to fancy he is well entitled to separate rank from even the Linnæan order, Primates, and to have more systematic honour conferred on him than what Cuvier allowed him. That great French naturalist placed man in a section separate from his four-handed order, Quadrumana, and, from his two hands and some other qualities, enrolled our race in an order, Bimana. Surely the ancients surpassed many modern naturalists of the Lamarckian school, who would derive him from an ourang, a chimpanzee, or a gorilla. One of them has nobly said—

Our own Sir William Hamilton, in a few powerful words has condensed what will ever be, we are thankful to suppose, the general idea of most men, be they naturalists or not, that mind and soul have much to distinguish us from every other animal:—

"What man holds of matter does not make up his personality. Man is not an organism. He is an intelligence served by organs. They are his, not he."

As a mere specimen, we subjoin two or three anecdotes, although the species, Homo sapiens, has supplied, and might supply, many volumes of anecdotes touching on his whims and peculiarities. As a good example of the Scottish variety, who is there that does not know Dean Ramsay's "Reminiscences?" Surely each nation requires a similar judicious selection. Mr Punch, especially when aided by his late admirable artist, John Leech, shows seemingly that John Bull and his family are as distinct from the French, as the French are from the Yankees.

Thomas Gainsborough the Artist, and the Tailor.

Gainsborough, the painter, was very ready-witted. His biographer records the following anecdote of him as very likely to be authentic. The great artist occasionally made sketches from an honest old tailor, of the name of Fowler, who had a picturesque countenance and silver-gray locks. On the chimney-piece of his painting-room, among other curiosities, was a beautiful preparation of an infant cranium, presented to the painter by his old friend, Surgeon Cruickshanks. Fowler, without moving his position, continually peered at it askance with inquisitive eye. "Ah! Master Fowler," said the painter, "that is a mighty curiosity." "What might it be, sir, if I may be so bold?" "A whale's eye," replied Gainsborough. "Oh! not so; never say so, Muster Gainsborough. Laws! sir, it is a little child's skull!" "You have hit upon it," said the wag. "Why, Fowler, you are a witch! But what will you think when I tell you that it is the skull of Julius Cæsar when he was a little boy?" "Do you say so!" exclaimed Fowler, "what a phenomenon!"

This reminds us of a similar story told of a countryman, who was shown the so-called skull of Oliver Cromwell at the museum in Oxford, and expressed his delight by saying how gratifying it was to see skulls of great men at different ages, for he had just seen at Bath the skull of the Protector when a youth!

Sir David Wilkie and the Baby.

A very popular novelist and author of the present day tells the following anecdote of the simplicity of Sir David Wilkie, with regard to his knowledge of infant human nature:—

On the birth of his first son, at the beginning of 1824, William Collins, the great artist, requested Sir David Wilkie to become one of the sponsors for his child. The painter's first criticism on his future godson is worth recording from its simplicity. Sir David, whose studies of human nature extended to everything but infant human nature, had evidently been refreshing his faculties for the occasion, by taxing his boyish recollections of puppies and kittens; for, after looking intently into the child's eyes as it was held up for his inspection, he exclaimed to the father, with serious astonishment and satisfaction, "He sees!"

"Man is an animal unfledged,A monkey with his tail abridged;A thing that walks on spindle legs,With bones as brittle, sir, as eggs;His body, flexible and limber,And headed with a knob of timber;A being frantic and unquiet,And very fond of beef and riot;Rapacious, lustful, rough, and martial,To lies and lying scoundrels partial...!