Great Pianists on Piano Playing Study Talks with Foremost Virtuosos. A Series of Personal Educational Conferences with Renowned Masters of the Keyboard, Presenting the Most Modern Ideas upon the Subjects of Technic, Interpretation, Style and Expression 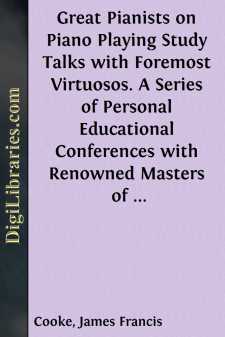 THE ARTIST'S LIFE The Virtuoso's Career as It Really Is

The father of a young woman who was preparing to become a virtuoso once applied to a famous musical educator for advice regarding the future career of his daughter. "I want her to become one of the greatest pianists America has ever produced," he said. "She has talent, good health, unlimited ambition, a good general education, and she is industrious." The educator thought for awhile, and then said, "It is very likely that your daughter will be successful in her chosen field, but the amount of grinding study she will be obliged to undergo to meet the towering standards of modern pianism is awful to contemplate. In the end she will have the flattery of the multitude, and, let us hope, some of their dollars as well. In return, she may have to sacrifice many of the comforts and pleasures which women covet. The more successful she is, the more of a nomad she must become. She will know but few days for years when she will not be compelled to practice for hours. She becomes a kind of chattel of the musical public. She will be harassed by ignorant critics and perhaps annoyed by unreliable managers. In return she has money and fame, but, in fact, far less of the great joy and purpose of life than if she followed the customary domestic career with some splendid man as her husband. When I was younger I used to preach quite an opposite sermon, but the more I see of the hardships of the artist's life the less I think of the dollars and the fame it brings. It is hard enough for a man, but it is twice as hard for a woman."

Some cynic has contended that the much-despised "Almighty Dollar" has been the greatest incentive to the struggling virtuoso in European music centers. Although this may be true in a number of cases, it is certainly unjust in others. Many of the virtuosos find travel in America so distasteful that notwithstanding the huge golden bait, the managers have the greatest difficulty in inducing the pianists to come back. Indeed, there are many artists of great renown whom the managers would be glad to coax to our country but who have withheld tempting offers for years. One of these is Moritz Moszkowski, probably the most popular of modern pianoforte composers of high-class music. Grieg, when he finally consented to make the voyage to America, placed his price at two thousand five hundred dollars for every concert—a sum which any manager would regard prohibitive, except in the case of one world-famous pianist. Grieg's intent was obvious.

The inconveniences of travel in America have been ridiculously exaggerated in Europe, and many virtuosos dread the thought of an American trip, with the great ocean yawning between the two continents, and red-skinned savages just beyond New York or certainly not far from Chicago. De Pachmann detests the ocean, and when he comes over in his favorite month of June he does not dare return until the following June. Others who have never visited America must get their idea of American travel from some such account as that of Charles Dickens in his unforgivable American Notes (1842), in which he said, in describing one of our railroads: