Gentle Measures in the Management and Training of the Young Or, the Principles on Which a Firm Parental Authority May Be Established and Maintained, Without Violence or Anger, and the Right Development of the Moral and Mental Capacities Be Promoted by Methods in Harmony with the Structure and the Characteristics of the Juvenile Mind 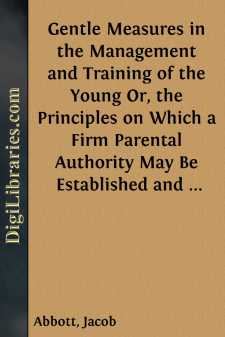 CHAPTER I. THE THREE MODES OF MANAGEMENT.

It is not impossible that in the minds of some persons the idea of employing gentle measures in the management and training of children may seem to imply the abandonment of the principle of authority, as the basis of the parental government, and the substitution of some weak and inefficient system of artifice and manoeuvring in its place. To suppose that the object of this work is to aid in effecting such a substitution as that, is entirely to mistake its nature and design. The only government of the parent over the child that is worthy of the name is one of authority—complete, absolute, unquestioned authority. The object of this work is, accordingly, not to show how the gentle methods which will be brought to view can be employed as a substitute for such authority, but how they can be made to aid in establishing and maintaining it.

There are three different modes of management customarily employed by parents as means of inducing their children to comply with their requirements. They are,

1. Government by Manoeuvring and Artifice.

2. By Reason and Affection.

1. Many mothers manage their children by means of tricks and contrivances, more or less adroit, designed to avoid direct issues with them, and to beguile them, as it were, into compliance with their wishes. As, for example, where a mother, recovering from sickness, is going out to take the air with her husband for the first time, and—as she is still feeble—wishes for a very quiet drive, and so concludes not to take little Mary with her, as she usually does on such occasions; but knowing that if Mary sees the chaise at the door, and discovers that her father and mother are going in it, she will be very eager to go too, she adopts a system of manoeuvres to conceal her design. She brings down her bonnet and shawl by stealth, and before the chaise comes to the door she sends Mary out into the garden with her sister, under pretense of showing her a bird's nest which is not there, trusting to her sister's skill in diverting the child's mind, and amusing her with something else in the garden, until the chaise has gone. And if, either from hearing the sound of the wheels, or from any other cause, Mary's suspicions are awakened—and children habitually managed on these principles soon learn to be extremely distrustful and suspicious—and she insists on going into the house, and thus discovers the stratagem, then, perhaps, her mother tells her that they are only going to the doctor's, and that if Mary goes with them, the doctor will give her some dreadful medicine, and compel her to take it, thinking thus to deter her from insisting on going with them to ride.

As the chaise drives away, Mary stands bewildered and perplexed on the door-step, her mind in a tumult of excitement, in which hatred of the doctor, distrust and suspicion of her mother, disappointment, vexation, and ill humor, surge and swell among those delicate organizations on which the structure and development of the soul so closely depend—doing perhaps an irreparable injury....