Fifteen Thousand Useful Phrases A Practical Handbook Of Pertinent Expressions, Striking Similes, Literary, Commercial, Conversational, And Oratorical Terms, For The Embellishment Of Speech And Literature, And The Improvement Of The Vocabulary Of Those Persons Who Read, Write, And Speak English 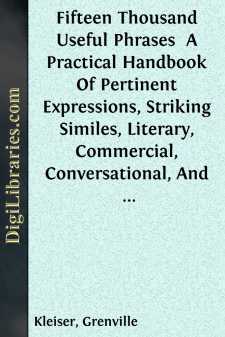 The most powerful and the most perfect expression of thought and feeling through the medium of oral language must be traced to the mastery of words. Nothing is better suited to lead speakers and readers of English into an easy control of this language than the command of the phrase that perfectly expresses the thought. Every speaker's aim is to be heard and understood. A clear, crisp articulation holds an audience as by the spell of some irresistible power. The choice word, the correct phrase, are instruments that may reach the heart, and awake the soul if they fall upon the ear in melodious cadence; but if the utterance be harsh and discordant they fail to interest, fall upon deaf ears, and are as barren as seed sown on fallow ground. In language, nothing conduces so emphatically to the harmony of sounds as perfect phrasing—that is, the emphasizing of the relation of clause to clause, and of sentence to sentence by the systematic grouping of words. The phrase consists usually of a few words which denote a single idea that forms a separate part of a sentence. In this respect it differs from the clause, which is a short sentence that forms a distinct part of a composition, paragraph, or discourse. Correct phrasing is regulated by rests, such rests as do not break the continuity of a thought or the progress of the sense.

GRENVILLE KLEISER, who has devoted years of his diligent life to imparting the art of correct expression in speech and writing, has provided many aids for those who would know not merely what to say, but how to say it. He has taught also what the great HOLMES taught, that language is a temple in which the human soul is enshrined, and that it grows out of life—out of its joys and its sorrows, its burdens and its necessities. To him, as well as to the writer, the deep strong voice of man and the low sweet voice of woman are never heard at finer advantage than in the earnest but mellow tones of familiar speech. In the present volume Mr. Kleiser furnishes an additional and an exceptional aid for those who would have a mint of phrases at their command from which to draw when in need of the golden mean for expressing thought. Few indeed are the books fitted to-day for the purpose of imparting this knowledge, yet two centuries ago phrase-books were esteemed as supplements to the dictionaries, and have not by any manner of means lost their value. The guide to familiar quotations, the index to similes, the grammars, the readers, the machine-made letter-writer of mechanically perfect letters of congratulation or condolence—none are sententious enough to supply the need. By the compilation of this praxis, Mr. Kleiser has not only supplied it, but has furnished a means for the increase of one's vocabulary by practical methods. There are thousands of persons who may profit by the systematic study of such a book as this if they will familiarize themselves with the author's purpose by a careful reading of the preliminary pages of his book. To speak in public pleasingly and readily and to read well are accomplishments acquired only after many days, weeks even, of practise....