Elements of Military Art and Science Or, Course Of Instruction In Strategy, Fortification, Tactics Of Battles, &C. Embracing The Duties Of Staff, Infantry, Cavalry, Artillery, And Engineers; Adapted To The Use Of Volunteers And Militia; Third Edition; With Critical Notes On The Mexican And Crimean Wars. 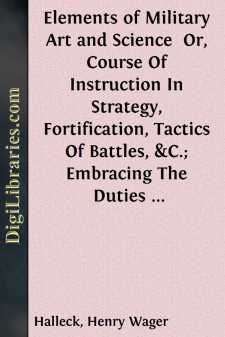 Our distance from the old world, and the favorable circumstances in which we have been placed with respect to the other nations of the new world, have made it so easy for our government to adhere to a pacific policy, that, in the sixty-two years that have elapsed since the acknowledgment of our national independence, we have enjoyed more than fifty-eight of general peace; our Indian border wars have been too limited and local in their character to seriously affect the other parts of the country, or to disturb the general conditions of peace. This fortunate state of things has done much to diffuse knowledge, promote commerce, agriculture, and manufactures; in fine, to increase the greatness of the nation and the happiness of the individual. Under these circumstances our people have grown up with habits and dispositions essentially pacific, and it is to be hoped that these feelings may not soon be changed. But in all communities opinions sometimes run into extremes; and there are not a few among us who, dazzled by the beneficial results of a long peace, have adopted the opinion that war in any case is not only useless, but actually immoral; nay, more, that to engage in war is wicked in the highest degree, and even brutish.

All modern ethical writers regard unjust war as not only immoral, but as one of the greatest of crimes—murder on a large scale. Such are all wars of mere ambition, engaged in for the purpose of extending regal power or national sovereignty; wars of plunder, carried on from mercenary motives; wars of propagandism, undertaken for the unrighteous end of compelling men to adopt certain religious or political opinions, whether from the alleged motives of "introducing a more orthodox religion," or of "extending the area of freedom." Such wars are held in just abhorrence by all moral and religious people: and this is believed to be the settled conviction of the great mass of our own citizens.

But in addition to that respectable denomination of Christians who deny our right to use arms under any circumstances, there are many religious enthusiasts in other communions who, from causes already noticed, have adopted the same theory, and hold all wars, even those in self-defence, as unlawful and immoral. This opinion has been, within the last few years, pressed on the public with great zeal and eloquence, and many able pens have been enlisted in its cause. One of the most popular, and by some regarded one of the most able writers on moral science, has adopted this view as the only one consonant with the principles of Christian morality.

It has been deemed proper, in commencing a course of lectures on war, to make a few introductory remarks respecting this question of its justifiableness. We know of no better way of doing this than to give on the one side the objections to war as laid down in Dr. Wayland's Moral Philosophy, and on the other side the arguments by which other ethical writers have justified a resort to war. We do not select Dr....