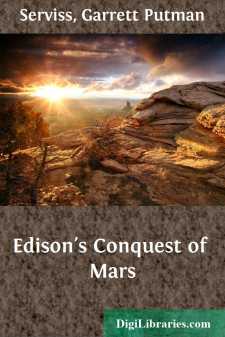 If you picked up a magazine and read in it a story mentioning a passenger-carrying rocket driven by atomic power furnished by a substance prepared from uranium, you probably would not be greatly surprised. After all, such an invention is today but a step or two ahead of cold fact. But you might be surprised to learn that if this story was A Columbus of Space, the one I happen to have in mind, your grand-parents may well have read it before you were born—for A Columbus of Space was published in All-Story magazine in 1909, thirty years before the potentialities of U235 were realized, and nearly forty before the atomic bomb became a problem for people to think about.

Did the author of this story simply make a lucky shot in the dark? Perhaps; but let me tell those who are inclined to think so that he was a Carnegie lecturer, a member of half-a-dozen learned societies, one of the first to write a book on Einstein's theory of relativity, and an internationally known figure in his specialty, astronomy. His name is Garrett Putman Serviss.

He was born on March 24, 1851, at Sharon Springs, New York, of native New England stock. His interest in astronomy began as a boy, and was greatly stimulated when he began to examine the beauties of the heavens through a small telescope, the gift of his older brother. This encouraged his enrolling in the course of science at Cornell University in 1868 (its opening year) from which he was graduated in 1872. There followed two years at the Columbia College Law School, which he left as an LL. B.; and in June, 1874 he was admitted to the bar. He did not practice law, however, but turned instead to newspaper reporting.

Whence came this interest in law and journalism? We can only guess, tracing its onset to the man's college days. As a Cornell sophomore, he was the class poet; as a senior, its historian; and on commencement day delivered an oration on "The Perpetuity of the Heroic Element." But whatever the origin of the interest, unquestioned ability supported it. From the position of reporter and correspondent with the New York Tribune he rose to the post of copy editor on the staff of the Sun. Finally he became night editor, a position which he held for a full decade.

During this period we can see the old interest in science gradually assert itself. At first it took the form of anonymous articles, mainly on matters astronomical. These usually appeared on the editorial page and, partly because they were then a novelty, partly because of a quirk of fate—editor-in-chief Charles Dana frequently had them set up in bold type, believing their logic was a fine counter-irritant for heated political campaigns of the day—the attention of subscribers was focused on them more sharply than usual. In fact, readers over the entire country were soon conjecturing about the identity of "the Sun's astronomer." Very few knew that it was Garrett Serviss, who successfully cloaked his identity for years.

Success in written popularizing of science led him to attempt its duplication on the lecture platform. There his triumphs were such as to lead him to resign as night editor of the Sun in 1892 and make astronomy his life work. Until 1894 he was occupied with "The Urania Lectures." These were sponsored by Andrew Carnegie, and dealt with geology, astronomy, archeology and similar scientific topics. With them Serviss successfully toured the country, and it was only because of the great difficulty in transporting the elaborate staging equipment they required that they were eventually discontinued. He continued to give popular lectures, however, and one of his few biographers has credited his greatness on the rostrum to "a pleasant voice, a charming personality, and a genuine enthusiasm for his subject."

One cannot doubt this enthusiasm; it shines forth unmistakably from all his writings....