Directions for Navigating on Part of the South Coast of Newfoundland, with a Chart Thereof, Including the Islands of St. Peter's and Miquelon And a Particular Account of the Bays, Harbours, Rocks, Land-marks, Depths of Water, Latitudes, Bearings, and Distances from Place to Place, the Setting of the Currents, and Flowing of the Tides, &c., from an Actual Survey, Taken by Order of Commodore Pallisser, Governor of Newfoundland, Labradore, &c. 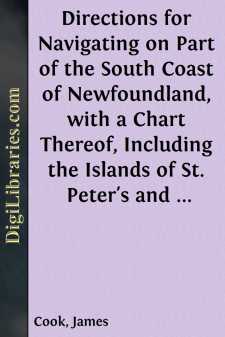 Cape Chapeaurouge. Cape Chapeaurouge, or the Mountain of the Red Hat, is situated on the West side of Placentia Bay, in the Latitude of 46° 53' North, and lies nearly West 17 or 18 Leagues from Cape St. Maries; it is the highest and most remarkable Land on that Part of the Coast, appearing above the rest something like the Crown of a Hat, and may be seen in clear Weather 12 Leagues.

Harbours of St. Laurence Close to the Eastward of Cape Chapeaurouge are the Harbours of Great and Little St. Laurence. To sail into Great St. Lawrence, which is the Westermost, there is no Danger but what lies very near the Shore; taking Care with Westerly, and particularly S.W. Winds, not to come too near the Hat Mountain, to avoid the Flerrys and Eddy Winds under the high Land. The Course in is first N.W. till you open the upper Part of the Harbour, then N.N.W. half W. The best Place for great Ships to Anchor, and the best Ground is before a Cove on the East-side of the Harbour in 13 Fathom Water. A little above Blue Beach Point, which is the first Point on the West-side; here you lie only two Points open: You may Anchor any where between this Point and the Point of Low Beach, on the same Side near the Head of the Harbour, observing that close to the West Shore, the Ground is not so good as on the other Side. Fishing Vessels lay at the Head of the Harbour above the Beach, sheltered from all Winds.

To sail into Little St. Laurence you must keep the West Shore on Board, in order to avoid a sunken Rock which lies a little without the Point of the Peninsula, which stretches off from the East-side of the Harbour: You Anchor above this Peninsula, (which covers you from the Sea Winds) in 3 and 4 Fathom Water, a fine sandy Bottom. In these Harbours are good Fishing Conveniencies, and plenty of Wood and Water. Ships may Anchor without the Peninsula in 12 Fathom good Ground, but open to the S.S.E. Winds.

Sauker Head. Sauker-Head lies 3 Miles to the Eastward of Cape Chapeaurouge, it is a pretty high round Point, off which lie some sunken Rocks, about a Cable's Length from the Shore.

Garden Bank This Bank whereon is from 7 to 17 Fathom Water, lies about half a Mile off from Little St. Laurence, with Blue Beach Point on with the East Point of Great St. Laurence.

Ferryland Head. Ferryland head lies S.W. 1 Mile from Cape Chapeaurouge, it is a high rocky Island, just seperated from the Main; it and Cape Chapeaurouge are sufficient Marks to know the Harbours of St. Laurence.

Bay of Laun. West 5 Miles from Ferryland-Head, lies the Bay of Laun, in the Bottom of which are two small Inlets, called Great and Little Laun. Little Laun, which is the Eastermost, lies open to the S.W. Winds, which generally prevails upon this Coast, and therefore no Place to Anchor in. Great Laun lies in about N. by E. 2 Miles, is near half a Mile wide, whereon is from 14 to 3 Fathom Water. To sail into it, you must be careful to avoid a sunken Rock, which lies about a quarter of a Mile off from the East Point....